Almost all flat screens have a weak point. That’s the pale sound from the built-in speakers. The performance and thus the volume of the loudspeakers integrated into the devices is sufficient in most cases also for larger rooms, but the sound image with little treble and only weak bass leaves much to be desired. If you want to enjoy the fantastic pictures of modern TV sets as well as the corresponding sound of movies and music, you have to buy a 2.1 home cinema system

The Panasonic SC-BTT105EG9 2.1 Home Cinema System delivers 300 watts of music performance and connects to other music, picture and video playback devices via Bluetooth, WLAN and USB

In order to produce optimum stereo sound, the small speakers of the 2.1 home cinema system with the mid-range and tweeters must be placed in front of the television on the left and right side of the screen at a not too small distance from each other. The possibilities naturally depend on the space available and the floor space in the room. The best position is to place the speakers at a distance from each other that corresponds to the distance between the screen and the viewer. The height of the speaker positions should also correspond to the ear height of the viewer. The individual bass loudspeaker can basically be placed anywhere in the room. The direction from which the low frequencies reach the listener cannot be located by the human ear. A good place for the bass speaker is between the other two speakers and can also be near the screen

A 2.1 home theater system includes a receiver with built-in amplifier. The receiver connects to the TV and/or a Blu-Ray player or game console and amplifies the audio signals before they are sent to the speakers. With the new 2.1 home cinema system, wireless connection via Bluetooth is also possible with mobile devices such as smartphones or tablets for playing movies and music. In addition, the receivers of some 2.1 home cinema systems can be integrated via LAN or WLAN into a home network and thus also play movies and videos from the PC with good stereo sound. If the TV set is equipped with a 3D function or 4K resolution, the receiver of the 2.1 home cinema system must also be powerful enough to play back 3D movies and high-definition videos. The Onkyo LS3200 2.1 Home Cinema System provides Bluetooth audio streaming and a bass speaker wirelessly connected to the receiver. Practically, the Onkyo home theater system can be conveniently controlled with almost any TV remote control. When buying a 2.1 home cinema system, you should not be tempted to buy by high wattage. A high wattage does not automatically mean a better sound. Often home cinema systems with a seemingly low performance sound better than supposedly strong systems. Those who have the opportunity should test the sound of the home cinema system before buying. There is hardly anything as individual as the sound sensation of a human being. You should also make sure that your home theater system has a receiver that does not limit the functions of your TV and that it supports 4K, 3D and the wireless transmission of audio data from mobile devices via Bluetooth. 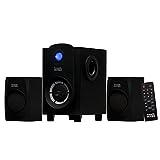 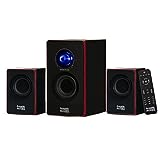 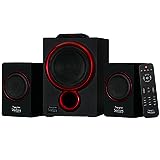