When training with an abdominal muscle belt, the muscles in the abdominal region are stimulated with gentle electrical impulses. As a rule, these belts are adjusted in such a way that each individual muscle contraction is stimulated with a weak impulse at the beginning. This impulse slowly becomes stronger over time and is then held at the set level. The impulses are transmitted to the abdominal muscles via electrodes and the skin. When the impulse reaches the muscle, the muscle fiber contracts. If the impulse ends, the muscle relaxes again. With abdominal muscle belts, care must be taken to ensure that the belt lies close to the abdomen in order to be able to develop its full effect. This is the only way to ensure that the maximum impulse reaches the muscle fibre and that the stimulation is optimal. For many users, the feeling is unpleasant and alienating when using an abdominal muscle belt for the first time. After a short time one gets used to this feeling. Then it is recommended to increase the intensity in order to achieve the maximum training effect. It should be noted here that the use of an abdominal muscle belt alone does not develop a six-pack. This requires additional training.

The most popular belt for electrostimulation of the muscles in the abdominal region is the EM 35 model from Beurer. At first glance, this seems unimpressive and simple even compared to other more expensive models. However, it still impresses with its high-quality workmanship. The heart of the device is located on the front of the belt. There is a small computer made of plastic with a simple one-line display. The computer is child’s play to operate with just four buttons. The abdominal muscle belt has a button to turn the computer on and off and a button to set the correct program. Furthermore, on the right side there are two switches to increase or decrease the intensity. The inside of the abdominal muscle belt consists of rubber, two electrodes in the middle and one electrode on each side to stimulate the lateral muscles of the abdominal region.

It is recommended to rub some water on the rubberized surface before putting on the belt. In addition, the stomach can also be moistened a little. Now the belt can be put on tightly and is closed with the velcro. The programs of the Beurer EM 35 last from 22 minutes up to 31 minutes. In the course of these programs you should slowly increase the intensity. How quickly you increase the strength of the impulses should be decided according to your physical sensation and well-being. Each program starts with a short warm-up phase in which the intensity is very low. The actual program starts at minute three. Now the actual sentences are worked through. The progress of the program can be followed on the single-line display. Once the program has run down, the so-called cool-down follows. The intensity is automatically reduced again within a period of about two minutes. When the cool-down is finished, an acoustic signal sounds.

When the belt is used for the first time, an intensity of ten feels very strong. Each impulse is perceived as a small electric shock. However, one gets used to it very quickly, so that the intensity can be increased quickly. It is advisable to do something different with an abdominal muscle belt during use and to distract yourself. Whether it’s something for work, a housework or a book that has been lying on your bedside table for too long, an abdominal muscle belt alone doesn’t make a six-pack. But in combination with proper abdominal muscle training, visible results can be achieved much more quickly. Another positive effect is that the muscles in the abdominal region recover more quickly when used with the abdominal muscle belt. It should also be noted that the belt is only effective with regular use. 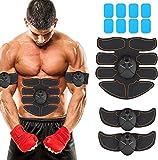 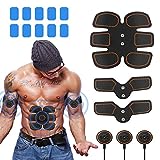 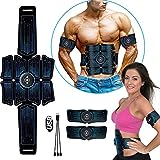