A ball bearing is a bearing in which rolling bodies are inserted between an inner and outer ring to reduce frictional resistance. Ball bearings are mainly used to fix shafts and axles. Depending on the design, they allow radial or axial rotation of the shaft

The ball bearing has an extremely rich history dating back over 2700 years. At the end of the 20th century, during archaeological excavations, a Celtic chariot was discovered with cylindrical pieces of beech wood near the wheel hubs. Based on this discovery, researchers and archaeologists assume that the Celts used a primitive form of cylindrical roller bearing as early as 700 BC to improve the rolling resistance of cars and carts. Towards the end of the Roman Empire, ball bearings were also used in Rome to build powerful hoists. The history of the modern ball bearing began during the industrial revolution in the second half of the 18th century. During the period of industrial upheaval, the need arose for a bearing that could deliver better performance than traditional plain bearings at low speeds. The plain bearings used up to then were not really useful at low speeds, because they were wearing out very quickly. John Harrison is considered the forefather of the modern ball bearing. In 1759, the watchmaker invented a roller bearing with cage, which he had developed especially for a ship’s chronometer from his manufactory. In the course of the centuries numerous new variants were added. Major developments and innovations have taken place above all in the areas of manufacturing accuracy and lubricant development. Numerous standards have established common standard dimensions, which have greatly simplified design and development. Today, there are highly developed ball bearings with integrated sensors that can be used, for example, to determine the degree of wear electronically

Ball bearings represent a subgroup of rolling bearings in which balls (rolling elements) are used to achieve optimum rolling resistance. In modern ball bearings, cages are used which serve to keep the rolling elements (balls, cones, cylinders) at an equal distance. Although ball bearings without cages have proven less reliable, some special designs that do not require cages are still produced. These are primarily used in aircraft control systems. In rolling bearings without a cage, more rolling elements can be used per bearing, which leads to a significant increase in load capacity. However, these are absolutely unsuitable for use at higher speeds. Cages were initially made of brass. Brass offered an increased smoothness of running, whereby ball bearings found more and more areas of application and gained popularity. Nowadays, cages are made of glass fibre reinforced plastic, which has similar characteristics to brass, but is much cheaper to produce

The service life of a ball bearing depends on many different factors. Some influencing variables, such as bearing load, can be calculated mathematically, while others, such as contamination or lubricating condition, cannot be determined mathematically. In the case of ball bearings, there are sometimes serious differences in quality, so that rolling bearings have an average service life of a few hundred hours for less demanding application scenarios such as in household appliances. On the other hand, there are high performance ball bearings that offer high reliability and manufacturing quality and have an average service life of several hundred thousand hours. These high-quality rolling bearings are mainly used in aviation and shipping. 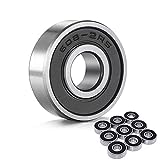 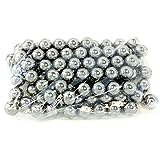 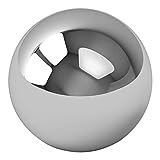 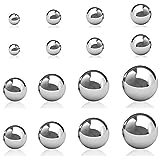