This is the balance between the different pH values in the body. However, various factors can disturb the acid-base balance enormously: – caffeine – alcohol – nicotine – insomnia – wrong nutrition – stress – lack of vital substances. Overacidity can lead to digestive problems, but also to kidney, skin or liver problems. However, base powders, base cures and base teas with specially selected herbs help against this. They help to neutralize the acids and flush them out of the body with toxins and waste products

What is an acid-base balance?

Since 1913, this form of nutrition has been recommended in alternative medicine as healing and health-promoting. It can be foods with more alkaline and less acid-producing proportions or food supplements. The reason for this is the hypothesis that the usual civilization food is overacidified and that this leads to an imbalance in the acid-base balance. Excess acids would be stored mainly in the connective tissue, which bind alkaline minerals and form salts. This, in turn, would lead to demineralisation of the bone tissue and health-damaging consequences. These could be chronic ailments or various diseases, such as:- arthritis- gout- neurodermatitis- muscle complaints- osteoporosis- rheumatic diseases- cardiac arrhythmias- sleep disorders- chronic fatigue- cancer- allergies

For the first time this thesis, an imbalance in the acid-base balance leads to diseases, was probably put forward in the 17th century by Francis de la Boe Sylvius, referring to the bodily fluids according to the ideas of humoral pathology at that time. This theory was taken up by Franz Xaver Mayr and Howard Hay at the beginning of the 20th century. Mayr also said that “acid is the cell poison par excellence”. But this theory became really popular by the Swedish biochemist Ragnar Berg. He analyzed the alleged acid and alkaline content in the ashes of many burnt foods. He equated the anions with acids and the cations with bases. The findings correlated with the urine values determined after a predominantly meaty and a predominantly vegetable diet. Since he associated ketoacidosis in diabetics with hyperacidity, he came to the theory that an excess of acid can even lead to “acid death”. Bircher-Benner has taken up this theory as follows: In 1927 the German book “Kultursiechtum und Säuretod” by Alfred McCann, an American physician, was published. He supports this theory and calls meat eaters kidney killers because the kidneys excrete the acids.

Certain herbs and plants actually have a detoxifying effect. These can include liquorice root, fennel, ginger or cinnamon. The use of alkaline baths is recommended for alkaline teas. These support the skin in eliminating toxins. Together with the base powder, base teas can help the body to maintain a balance in the acid-base balance. 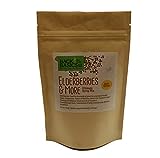