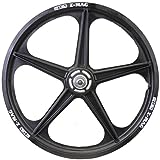 There are basically three different types of bicycle rims; clincher rims, tubular rims and tubeless rims. The rim size of the bicycle rim is determined by the size of the wheel. The unit in which the size is indicated is either in millimetres or in inches.

The clincher rimThe clincher rim is also known as the hook rim and clincher. Such rims have a circumferential internal small projection at the rim edges. The rim flanks of the wire rims are pulled up as a rim flange so that they guide the wire tire laterally. While the rim horns used to be smooth on the inside or had small beads, some manufacturers even have them projecting inwards by 2 mm. The stronger development of the horn hooks is related to the development of cycling, which has increased the use of clincher tyres over time. A pronounced hook enables the tyre wire to be supported at high air pressure, which also centres the tyre position in the rim.

The tubular rimThe tubular rim is attached to the tyre either with a putty or with a double-sided adhesive tape. The higher the tyre pressure, the smaller the circumference of the freely inflated tubular tyres. The tyre under pressure presses itself into the rim bed and is simply fixed in place by the mastic or adhesive tape. The modern versions of these rims have a more pronounced recess in the centre of the rim bed, which means that the tyre is better centred in the centre. The tubular tyres offer more driving comfort at the same weight as the clincher tyres.

In addition to the basic classification, a distinction is also made between box and hollow section rims. In the meantime, hollow-chamber rims have become the rule, as these bicycle rims, unlike box rims, have additional stability. This is due to the retracted intermediate floor. In addition, flat rims are given priority because of their aerodynamics and better stability compared to high bicycle rims.

The common material for bicycle rims is an aluminium alloy. There are also rims made of steel. However, the use of such rims is becoming increasingly rare, as the braking effect is less guaranteed with such rims. Carbon is also an excellent choice when it comes to materials. Mountain bikes and racing bikes are usually equipped with carbon rims. Titanium rims are manufactured for cycling racing. Before the pneumatic tires even rims were made of wood. Only since the Second World War have wooden rims been increasingly replaced by aluminium rims, so that today wooden rims are still available as custom-made products. Each bicycle rim has at least 36 fixed spokes. However, the number of spokes can also be smaller. The rims with fewer spokes are rims on racing bikes. Because of the higher load, tandems have rims with 40 spokes.