The brakes are particularly important for safety when driving a car. If they don’t work, it can end badly. Therefore it is good to understand which components the brake consists of and how they work. It consists of the brake disc, the brake calliper and the brake lining. Brake pads with the designation brake shoe or brake block are carrier components for the railway or bicycle.

The brake lining is also often called brake stone. This is a component designed to reduce the speed of the vehicle. The friction of the brake lining on the brake disc or a drum converts the kinetic energy into heat. The brake pads are attached to the inside of the brake calliper and cause friction. This is done by pressing the brake pedal. This presses a piston against the brake calliper. This in turn presses the brake pads against the brake disc. The wheel doesn’t turn so easily anymore and slows down. If this process happens to all four wheels at the same time, the car is decelerated in a controlled manner and comes to a standstill

1. Carrier plate:This consists either of grey cast iron or steel. In order to save weight, attempts are often made to use plastic carrier plates. Rail linings, on the other hand, do not have carrier plates but pressed-in plates.2. Brake pads partly have noise damping plates made of plastic or metal.3. Friction agent:- Semi-Metallic: This friction agent category contains 30 to 65 % metal (iron, steel, brass, copper, …). They are mixed with binders, graphite and fillers. Brake linings of this friction agent category are known for their low cost, long service life, good hot braking behaviour, but also high wear and tear and great susceptibility to squeaking. So far, they have mainly been sold in North America, but are increasingly being replaced by ceramic linings – Organic:This category of friction agents is sometimes called NAO (Non Asbestos Organic). It consists of fibres made of rubber, glass, carbon or Kevlar and Twaron. In addition, temperature-resistant nature, synthetic resins and fillers are included. These brake pads are quieter and softer. However, with thermal load their wear is higher. However, they develop less brake dust, wear the brake disc less and develop a poorer coefficient of friction. Their main markets are the USA and Japan – Low-Metallic: These consist of a mixture of organic substances of the category Organic and of 10 to 30 % metal, predominantly steel or copper. They have better braking characteristics, especially at high speeds, but cause more brake dust and tend to squeak. Europe is the main market for these brake pads – Ceramic:These ceramic brake pads were first used in 1985 and are therefore still relatively new on the market. They consist of ceramic fibres, binders, small amounts of metal and fillers. They are not only more expensive than the other brake pads, but also quieter and brighter. They also increase wear on the brake discs. Asbestos: Since the introduction of the Asbestos Regulation in the EU in 1989, asbestos has been banned in the manufacture of brake linings. Until then, a proportion of up to 42 % had been added to the brake linings. Even today, an increased concentration of asbestos can be detected in busy areas such as motorway exits, junctions, railway stations or runways. Only after a certain running-in time do brake linings unfold their full effect. During this running-in period, the surface of the brake linings adapts to the surface of the drum or brake disc, whose surface also changes and forms friction carbon. In general, brake linings should have a constant coefficient of friction, be temperature-resistant and mechanically loadable. 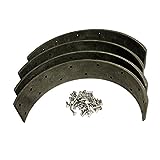 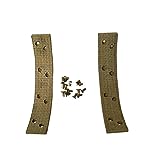 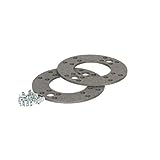 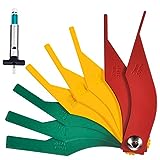