Fire extinguishers are not mandatory for cars, although fire protection and traffic experts have been calling for them for some time. To prevent a vehicle fire from turning into a horror scenario, a good fire extinguisher in the car that is always ready to hand would be highly recommended. There are fire extinguishers specially designed for cars and motor homes that are incredibly quick to deploy. Their handling is also child’s play and self-explanatory. Buyers should ensure compliance with the European standard DIN EN 3-7. 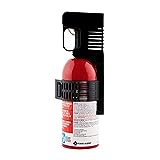 First of all, there are powder fire extinguishers and fire retardants for extinguishing a car fire. Whatever the nature of the device, it must be inspected by a specialist every two years, as is the case with any fire extinguisher. It is assumed that fire extinguishers will function safely for 20 years, only then must they be replaced. Within this period, they provide reliable security and protection.

During tests of car fire extinguishers and fire retardants, a specially prepared car is set on fire according to uniform conditions. For such a comparison, the experts ignite an experimental fire to such an extent that the extinguishers are loaded to their limits. The vehicle fire should reach a stage similar to that of an advanced incipient fire. Such a fire can still be extinguished itself, but it produces enough smoke to cause serious personal injury and property damage. The powder fire extinguishers extinguish such a fire, they also bring it under control very quickly. With 2 kg extinguishing powder there are still extinguishing agent reserves after extinguishing, 1 kg extinguishing powder is just enough. Fire retardants can no longer extinguish such a slightly larger fire. Your extinguishing agent jet is too weak for this, so in the end an extensive fire can spread unhindered. Fire retardants are therefore only recommended for smaller incipient fires. These could be incipient cable and fuel fires that sometimes occur when handling flying sparks in the engine compartment. If the fire is still small and comparatively “cold”, it can also be successfully fought with a fire retardant.

Many car fires are initially very small and are also immediately noticed by the smoke development. All cable fires are part of it. In such cases, fire retardants are sufficient as car fire extinguishers, the biggest advantage of which is their small size. This is usually between about 3 x 25 to 3.5 x 35 cm for commercial models, such a device can be very easily stowed in the vehicle. Powder-based car fire extinguishers are much larger at around 13 x 27 cm to 13 x 35 cm; they are a real nuisance in the footwell in front of the passenger seat. However, they should be placed there so that the driver has them at his fingertips in a flash. Another advantage of fire retarders is the lack of maintenance. According to the manufacturer, they are completely maintenance-free and are guaranteed to remain effective for up to 15 years. 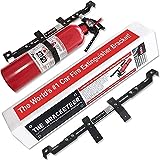 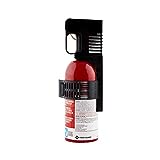 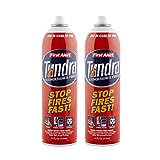