If you want to enjoy your CD collection not only at home but also on the road, you need a car radio with integrated CD player. For around two decades, car radios with CD players were the ultimate for music lovers. Due to the success of MP3 and online music streaming, however, car radios with CDs are hardly ever installed in new cars, and even accessories are no longer available from many manufacturers. Instead, infotainment systems with slots for USB sticks and SD cards can be found in the vehicles. For fans of the silver disc this means: Either they digitize their CDs or they buy a CD car radio. Anyone who chooses a car radio with CD player because of the better sound quality of CDs will find devices on the market that offer many useful additional functions. 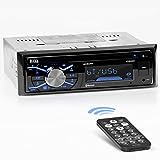 The difference in sound between a CD and an MP3 is also easy to detect for people who only listen to music occasionally. In other words: Between CD and MP3 there are worlds of sound. This is due to the sometimes very strong compression of MP3s, where the subtleties of the music are omitted or sound different than with the uncompressed CD version. The difference is particularly noticeable in MP3s with a low bit rate (below or equal to 128 kbps). Only at very high bit rates (from 320 kbps) is there hardly any difference even for music fans. Due to the large files at high bit rates, the advantage of MP3 is also lost. For music lovers the purchase of a CD car radio makes sense.

Anyone who decides to buy a CD car radio no longer has to worry about being limited to the compact disc when it comes to music. All well-known car radio manufacturers such as Clarion, JVC, Kenwood and Sony additionally equip their CD car radios with a USB port. This can be used to play music MP3s, audio books and a range of other audio formats on the device if required. The USB port of many car radios also serves as an interface for Android smartphones, iPhone and MP3 players such as the IPod.

Additional CD car radios equipped with Bluetooth, such as the Sony MEX-N4100BT, allow wireless pairing of Android, Apple and Windows smartphones with the device. The functions available via Bluetooth differ from car radio to car radio. Some use the Bluetooth connection to use the built-in speakerphone. The Siri Eyes Free function in combination with Apple smartphones also proves to be practical. It makes it possible to control many functions of the CD car radio with the help of Apple’s language assistant. Isolated car radios support NFC (Near Field Communication). If the radio standard is also supported by the smartphone, the two devices can only be coupled by approaching each other. The NFC connection also allows smartphone functions, such as music streaming from services such as Spotify, to be used via the CD car radio. A device that supports NFC, for example, has Kenwood with the KDC-X5000BT in its range.

If you also want to enjoy radio stations of the best quality, you should choose a CD car radio with support for DAB+. This enables the radio to reproduce digital radio stations, which offer considerably better sound quality, in addition to the well-known stations. Buyers should also take a look at the supported CD formats. Not every CD car radio also supports burned CDs. This is different with the Xomax XM-2CDB620 double DIN CD car radio. In addition to audio CDs, it also supports CD-R, CD+R, CD-RW and CD+RW.

Less a musical than a comfort function is the compatibility with an existing steering wheel remote control. With many cars this is designed for the original car radio of the manufacturer. For example, the manufacturer Pioneer offers an adapter for its KD-R971BT CD car radio, which can be operated via the steering wheel remote control. The removable control panel is generally recommended for car radios. It is intended to deter thieves and prevent them from breaking into the vehicle. Almost all current CD car radios offer this function. 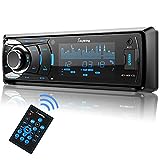