Masala Chai is the national drink of India. In Germany the tea is mostly sold as Chai tea, although it should be called Masala Chai. The word Chai means tea, Masala is the Indian term for spices. It is therefore a black tea that gets its special aroma from the addition of various spices. Chai is also much creamier than normal black teas due to the addition of milk and sugar.

What coffee is to Germans, Chai is to Indians. The spiced tea is consumed at any time of the day or night. Chai tea is offered in small stalls on all street corners, at every train station and in the shopping centres. The main components of tea are black tea, usually Assam, and various spices such as cinnamon, cardamom, ginger, anise, fennel and cloves. The tea is also served sweetened with honey, sugar or sweeteners and a dash of milk. Indians have their own way of enjoying aromatic tea. They pour it out of the cup onto a saucer and sip it with pleasure. This cools the drink down more quickly and it can be drunk immediately after preparation.

The scent of the ready-prepared tea stimulates the senses. Due to the spices used, it is a little reminiscent of Christmas teas in European latitudes. Figure-conscious people should not drink Chai too often, because the sugar and milk it contains make the drink a small calorie bomb. However, the spices promote the production of gastric juices, which ensure better digestion especially after a fatty meal. A cup of Masala Chai also has a calming effect on the body in case of colds and indisposition.

Each Indian family has their own recipe, according to which they prepare their Masala. However, this only applies to the spices and sweeteners added to the tea. The preparation of traditional Masala Chai is the same everywhere: First, water is boiled together with the milk, sugar and various spices and then lightly simmered for another minute. Only now are the tea leaves added. Assam tea is almost always used for this because it has a particularly strong aroma. The mixture must now draw for about ten minutes and is then poured through a sieve. Chai gets its creaminess from the fact that the finished tea is taken out of the cooking vessel several times with a ladle and poured back into it. In this way, air enters the mixture. This works in the same way as frothing milk for latte macchiato or cappuccino. Although Chai is prepared with black tea, it has no exciting effect like other caffeinated drinks. This is not only due to the spices, but also to the fact that the tea is very long-lasting.

For those who find the traditional preparation of Masala Chai too complicated, tea bags are available. This tea does not taste quite as aromatic, but can be served in a few minutes. Tea drinkers who like to try out different flavours will find a rich selection of Chai teas with special flavours, offered in bags or as loose tea. These include Elephant Vanilla Chai by David Rio, for example. Who likes it fruity, reaches for Chai with mango. Even very spicy varieties like Tiger Spice are available. Not necessarily traditional but better suited for teenagers and children are decaffeinated Chai varieties or Masala tea, which is made with green instead of black tea. Chai syrup is also available for those who are in a hurry to drink tea, which is simply infused with hot water or milk. 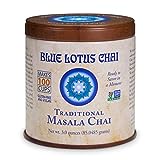 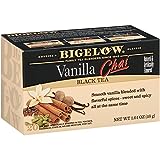 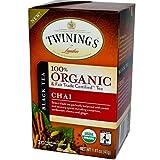