Classically, in many flower pots within the home, the potting soil still remains as a filler on which to grow plants. For many plants potting soil is not the ideal soil. It is used out of habit or ignorance even where clay granules are a real benefit. Here you will learn how clay granules are used, which plants are suitable for them and how repotting is possible.

When using clay granules, most people think of exotic plants. Especially exotic plants such as orchids or Tillandsia love the humid climate of hydroponics. In any case, orchids need particularly bright, translucent pots, plenty of space for their aerial roots and a high level of humidity. The granulate ideally supports the care here. But what about ordinary green plants? Can a ficus feel good in clay granules? And what about popular room palms like yucca or kentia palm? All these plants are in nature, unlike the orchid, firmly anchored to the ground, are surrounded by sand or earth and require a firm footing. Nevertheless, a filling with clay granules is an excellent way to provide the pot plant even better with water and nutrients. This is mainly due to the nature of the clay granules. 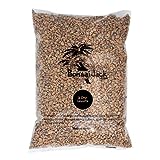 Everything for the garden: clay granules Video Guide

A hydroponic culture with clay granules works differently than the usual potting soil, both in the construction of the pot, as well as in the care. Granules are filled in closed vessels. The water may accumulate on the ground so that it can be absorbed by the clay granules. Via a level indicator placed in the pot it is now possible to read how high the water is and when it has to be re-poured. As a rule, pouring with average receptive granules is about three times rarer than with potting soil. The better the grain, the better the water can be passed on and used by the plant. Fertilizers should be added every four to eight weeks. The granules themselves contain no nutrients. However, it must also be changed less frequently than earth, because it does not consume.

If a plant, which was previously in a pot filled with earth, to be repotted, must above all be handled carefully and slowly. There are plants that should remain in a soil ball through their fine root nets, which is inserted into the granules. However, most plants can be carefully dug out of the ground and cleaned. The closed, new and clean pot can then be filled slowly around the intact roots with clay granules. The plant must end up sitting firmly and can not be pulled out by gentle jerking. Only in this way is an ideal supply guaranteed. Flowering plants can also be repotted in a hydroponic culture.

Tongranulat is sold by different suppliers in different quality levels. The granules of Seramis stand out from the offers positive, since they are suitable for various plants and offered in large packs cheap. The clay granulate is well processed and free of pollutants. For orchids and exotics, Seramis offers special granules, partly pre-fertilized. But also the clay granules from Bellandris and Dehner impress with their clean and efficient processing. If a green plant does not tolerate repotting in clay granules, it may be worthwhile to use another granulate mixture, to test it more frequently or to reduce the filling level of the water. Often the jamming wetness is responsible for the discomfort of the plant, which was previously accustomed to the difficult intake in potting soil. Thus, by gentle habituation even sophisticated indoor plants in hydroponics with clay granules feel well. 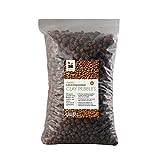