The random access memory (RAM) of a computer functions like a human’s short-term memory. During work, the PC permanently stores data in the main memory in order to accelerate access to it. Only when the computer is restarted all information is deleted from the RAM. In addition to the size of the working memory, the speed at which data can be written to and read from the memory is decisive for the working speed. In 2004, DDR2-RAM came onto the market as the successor to DDR-RAM (DDR = Double Data Rate). DDR2 memory devices are still commercially available today, but can only be used with older, compatible devices.

The main advantage of DDR2 compared to its predecessor DDR is the double reading and writing speed. In direct comparison to DDR-RAM, it noticeably accelerates access to data during PC work or gaming. The actual speed advantage depends, among other things, on the clock rate of the memory. A noticeable advantage over DDR-RAM is noticeable from a clock rate of 800 MHz (DDR2-800). This enables transfer rates of up to 6.4 GB/s per module and up to 12.8 GBs in the dual channel. Higher speeds allow DDR2-1066 modules with a clock rate of 1066 MHz to be used. They allow transmission rates of up to 17.0 GB in Dual Channel. Some modules allow even higher clock rates. To operate these so-called “overclocking memories”, however, PC users require a certain amount of technical know-how in order to be able to make the necessary settings in the BIOS of the computer. Parallel to doubling the read and write speed, the supply voltage was reduced from 2.5 volts (DDR RAM) to 1.8 volts. As a result, the power consumption of DDR2 RAM is reduced and less heat is generated, which makes the higher clock rates of the DDR2 RAM possible in the first place.

A value that many PC fans pay attention to when buying DDR2 RAM is the latency time. It indicates how quickly the RAM module is accessed. However, the differences are not as great here as is often propagated. In fact, they are not noticeable in everyday use. Only in benchmarks are there speed advantages for modules with low latency. Who uses his computer predominantly for working and/or only occasionally for playing can neglect this value with the purchase of DDR2-RAM calmly conscience.

How much DDR2-RAM a PC needs depends on the predominantly used software. For simple office applications, surfing the Internet and retrieving e-mails, a RAM of 2 to 4 GB is large enough. Graphics programs and games place higher demands on memory. For a smooth operation between 4 and 8 GB are necessary here. If the DDR2 RAM is too small, the change between programs takes longer and the computer can hang, which often requires a restart. How many memory modules can be operated in parallel and with which size in a PC depends on the mainboard. It is often possible to use two DDR2 modules, which together make up the total RAM (example: two modules each with 8 GB = 16 GB total RAM). DDR2-RAM is commercially available in the form of individual modules or as a kit. Kits are matched memory modules that support Dual Channel mode. It allows speed advantages to be achieved.

Important: When upgrading or replacing the DDR2-RAM, static charging can cause damage to the memory chips. For this reason, it is important to ground yourself to a radiator or to wear an antistatic wristband while working on a PC. 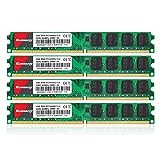 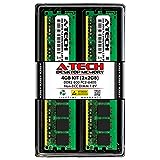 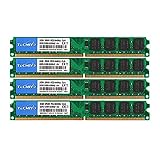 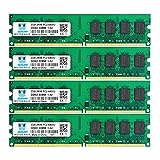