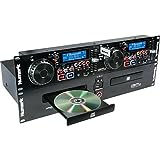 In the DJ scene, vinyl records have been the most popular sound carriers so far. In recent years, however, the compact disc has become more and more widespread. Reason for this is that only in the past five years Dj-CD-players were brought on the market, which also do justice to this designation. Another reason is the lack of haptics, because the vinyl sound carriers could be controlled by hand. Turning, pitching, and scratching belong to the maneuvers that every Dj uses. Earlier Dj-CD-players were only able to change the speed of the tracks. Vinyls were also better suited for scratching, because scratching is based on the mechanical movement of the vinyls. The pitching and scratching of a CD is not possible mechanically. Mathematical algorithms had to be developed first. The laser of a Dj CD player has no physical contact with the CD. The information is read out silently. The sound generation must therefore be generated with the help of a mathematical calculation. In recent years, many Dj-CD players have appeared on the market that offer all the important features and functions.

One of the basic functions of a Dj-CD player is to hold a cue point. The players have a cue function for this purpose. A track can thus be started at any position. There are also devices which can be used to define and save several starting points. These cue points are then automatically loaded as soon as the CD is inserted. In addition, some Dj CD players have an auto cue function. This ensures that the pauses at the beginning of a track are skipped

Especially when a DJ CD player is used in a club, or disco, an anti-shock buffer is essential. This should be sufficiently large. The buffer is intended to prevent the CD from jumping, especially when shaken. There are some devices on the market that have such a strong buffer that they can be shaken without the CD jumping

Most Dj CD players have additional features to enable Dj-typical effects, such as Flanger, Hall, or Delay. Other extensive equipment and features, such as sampler and loop functions, can also be found in many players. This increases the creative possibilities for the Dj immensely. All these gimmicks can only be found on the Dj-CD players and are not possible with a vinyl turntable. The Dj-CD-Player offers the Dj much more possibilities. Also the pitch correction is only possible with the Dj-CD-Player. So tracks can be played slower or faster. The pitch does not change, however. Some devices now also support MP3 files. In most cases, however, this is a simple playback support

If the above mentioned functions are not sufficient for you, you will also find devices with further functions. So there are Dj-CD-players which can play two tracks of a CD at the same time. They also have two separate outputs. This makes it possible to mix the two tracks with one mixer. There are also players that make it possible to control the CD using a vinyl record on a turntable. These devices can be combined with a scratch controller and make this function possible. 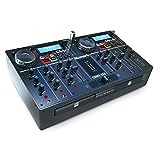