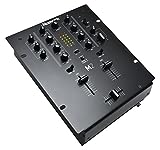 Regardless of the specific type of mixing console, the most important control components for level adjustment in the input area are two types of level controls. They have different functions. One type serves channel-selectively as an input amplifier for the input signal sources, which are thus adapted to the internal level of the mixer. These controllers are available for each channel, i.e. several times. The second type of level controls are the faders. There are usually sliders per channel with which the mixing ratio is adjusted and the desired sound is produced. Since the level controls belong to the input range, the sum channel is not influenced by them. The principle of operation shown here generally applies to the input area of all mixing consoles, whereby rotary potentiometers are occasionally used instead of the fader sliders. However, there are differences in the subsequent signal processing, comfort, complexity and areas of application. Both analogue and digital technology are common.

– Allround mixing consoles are commercially available devices for a wide range of applications, but without special features or strengths.

– DJ mixers are similar to all-rounders, but with special features for use by DJs. – Recording mixing consoles in analog or digital form are relatively elaborately constructed and designed for multi-channel recording technology, depending on the application.

– PA mixing consoles are usually very elaborately designed and high-quality devices for use in professional and mostly large-area sound reinforcement applications. For home and private users this technology is completely oversized and therefore not suitable.

– Desktop mixers are relatively inexpensive, usually have 2 or 4 input channels and a USB output port to connect a computer.

Unlike other mixer types, a DJ mixer can be used as an additional instrument that not only combines the overall sound from individual signal sources, but also influences, shapes and changes it to achieve the desired effects. The mixing console can also be combined with other effect devices. A crossfader is provided for easy scratching and cutting, which is a characteristic control element for DJ mixing consoles and distinguishes them from normal mixing consoles. Lighting control is also possible on some models.

DJ mixing consoles can be divided into two basic categories.
So-called battle mixers with mostly only 2 to 3 channels are limited to the most necessary control elements. This makes them manageable and easy to use, which is advantageous, for example, for the quick handling of scratching. They usually have knobs in the input area for internal level adjustment and the gain for mixing. Many of these devices are also suitable for mobile use.
The club mixers with mostly 4 channels and more are designed similar to the battle mixers. However, they are primarily intended for stationary use, but can also be used flexibly.

– Trim/Level, sometimes referred to as Gain, is used to adjust to a uniform internal working level level. 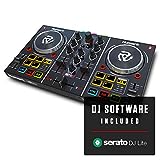 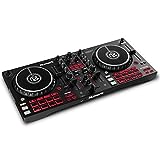 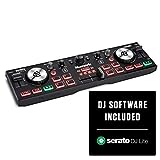