Dog owners with a garden can use a dog flap to enable their beloved four-legged friend to go out and in independently at any time. The big advantage is that mistress or master does not have to play the porter all the time, or the door is always open. Especially in cold weather such a dog flap can help to save energy, because the door stays closed and the dog still has all the freedom he wants.

The installation of a dog flap is permanent and cannot be undone so easily. Therefore you should inform yourself well and consider your requirements and those of your dog when choosing a product. It is important that the dog flap is large enough for your dog, even if he has gained a few kilos. So choose a slightly larger model. The dog flap should also be equipped with gaskets so that it closes well. A dog flap that closes badly will have a long-term negative effect on your energy costs. Before buying, you should also consider in which door the dog flap should be installed. For glass doors, for example, there are special dog flaps. You should also not disregard the security of your house. If you have a large dog and therefore also a large dog flap built in, this can also be large enough for a human. A burglar could use the dog flap to get into the house. You can exclude this risk, because there are security mechanisms for this as well.

The simplest dog flap is the one with the two-way lock. It has a two-part frame and a swing door that closes automatically by a magnet built into the lower part of the flap and is very popular because of its low price. With this simple model, you have two options for setting the flap: either your dog can use the flap in any direction or it is completely closed. The Staywell aluminium pet door from PetSafe, for example, offers you these possibilities. Here the soft flap sits in a sturdy aluminium frame, is easy to open and closes tightly. It is available in various sizes, can withstand large dogs up to 100 kg thanks to its professional workmanship and resistance, and can be easily installed in wooden doors or garage doors. Also the dog flap with a 4-way lock differs from the simplest model only with two further adjustment possibilities. Thanks to the 4-way lock, in addition to the possibilities of the 2-way lock, the dog can only get in, but not out, or he can only get out, but not in. If, for example, you leave your property and your dog is still in the garden, he can go into the house at some point, but will not come out again. Also the thermal insulation is rather small with the simple models, but for areas with mild climate these flaps are quite suitable.

A dog door with double door technology, which is equipped with two flaps and brushes each, offers protection against wind and weather. The air that collects in the space in between has the function of thermal insulation and the outer flap repels wind and rain. The dog flap closes automatically and protects against draughts thanks to a built-in magnetic strip. With all dog flaps presented so far also strange cats or dogs can come into the house. This cannot happen with a dog flap with infrared mechanism, because the flap is opened only by an infrared tag on the collar of your dog and remains otherwise safely closed. However, the pendant should be well attached to the collar, because if it is lost, the dog can no longer open the flap. The safest and best dog flap on the market today is the dog flap with microchip. Most dogs already carry a microchip anyway. If this is not the case, a veterinary surgeon may implant one. At the beginning, the dog flap reads the microchip and stores the data so that only the dog with the appropriate chip can open the flap. The microchip pet flap from SureFlap, for example, offers two options. It recognizes the dog by its unique microchip number or by the SureFlap RFID collar tag and opens the door only for stored animals. 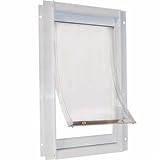 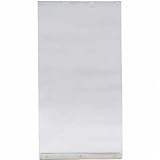