The dog glasses appear to some dog owners at first to be a pure fashion accessory that needs getting used to and therefore rather dispensable. One thing is certain: not every dog necessarily needs dog glasses. But for some specimens it is a very meaningful and helpful invention

Dog eyes do not differ substantially from human eyes. They are similarly sensitive when exposed to draughts, sun, insects, stones or dust particles and can ignite just as easily. Some dogs also suffer from eye diseases due to their genes or age, which make them sensitive to light, for example. Dog glasses can effectively protect against this. Sometimes dogs are also exposed to situations in which the wearing of dog glasses can make sense. For example, if a dog rides more often in a convertible, the airstream can cause him to have conjunctivitis. Wind, sand or salt water at the sea can also trigger such inflammations. This can easily be avoided with dog glasses. Hunting dogs, on the other hand, often have to rummage through dense undergrowth and undergrowth, which increases the risk of injury to the dog’s eyes. Also here a dog glasses offers a good protection against such injuries. If the dog’s eye is already injured or diseased or has to recover after an operation, dog glasses can also be a good support in the healing process and alleviate disease-related complaints.

After an Austrian avalanche dog of a Gasteier avalanche dog squadron became snow-blind on a mountain tour, optician Reinhold Kreyka had special protective glasses for dogs developed at the request of the dog handler. Avalanche dogs are exposed to extreme UV radiation in the mountains, which often leads to chronic inflammation of the cornea or conjunctiva. So the dog glasses were first developed and used as sunglasses. Under normal conditions, a dog with healthy eyes usually does not need sunglasses. However, some situations or diseases may require this.

Optically a dog glasses resembles very much a swimming goggles for humans. It has large oval lenses that fit snugly to the head and completely enclose the eyes. A foam padding on the inside of the lenses ensures pleasant wearing comfort. A headband with a flexible elastic band serves for fastening and can be adjusted to the respective head size. The frame and lenses of a good pair of glasses are usually made of polycarbonate, a plastic material which is characterised by its high breaking strength. In addition, it does not fog up and filters 100% UV light. The lenses are usually ventilated from the side through small air inlets to prevent the glasses from fogging up. For particularly light-sensitive dogs there are glasses with specially tinted lenses. A good pair of dog glasses rarely costs more than 25 EUR and is now offered by many different manufacturers. They are also available in different sizes to meet the anatomical requirements of the most diverse dog breeds.

A dog has to get used to his new glasses just like a human being. With a few little tricks it is easier:- First adjust the straps for the dog so that the glasses fit comfortably and do not pinch. Check the glasses for correct fit before each putting on – In the second step the glasses will only hold briefly before the eyes of the dog, but not yet put on. After a few repetitions, increase the time and put on the retaining straps for a moment – Only when the dog has got used to wearing his glasses for a short time, gradually increase the wearing time – A reward with tasty treats facilitates the exercise. The glasses can also be put on the dog during feeding. He’ll forget his glasses real quick. Especially light-sensitive dogs often get used to the dog glasses almost by themselves, because they notice very fast that the glasses do them good.
Conclusion: Even if the sight of a dog with glasses at first seems to take a little getting used to, the wearing of dog glasses can be helpful for many situations and very reasonable. 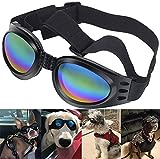 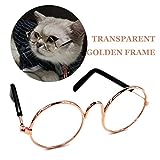 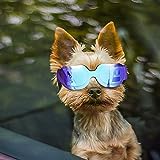 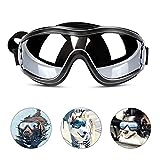