The fluorescent tube is an indispensable part of everyday life. Whether in offices, cellars, warehouses or workshops – the areas of application for the illuminant are diverse. In addition, lighting costs are low compared with the incandescent bulb, which is now banned throughout the EU. The elongated tubes are mainly used in places that do not have their own daylight source. So-called full spectrum or daylight fluorescent tubes are able to imitate natural daylight (colour temperature 5,800 Kelvin). In this way, the fluorescent tubes ensure that people feel comfortable in artificially lit rooms and can concentrate on their work. But the fluorescent tube is not undisputed and environmentally friendly alternatives such as LED fluorescent tubes are on the advance. Where the differences lie and what is important when buying, this guide clarifies. 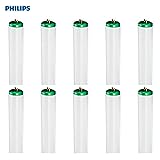 Conventional fluorescent tubes, which are used millions of times, generate light by means of a gas discharge. Fluorescent tubes contain a mixture of mercury and argon. In simplified terms, the process of generating light works as follows: The electrodes in the tube heat up to 2000 °C and cause parts of the contained mercury to evaporate. By collision of mercury atoms and electrons it comes to glow and the tube gives off the desired light. For operation, fluorescent tubes require a ballast. This is either an ECG (electrical ballast) or a CCG (conventional ballast). Its task is to protect the fluorescent tube from bursting by throttling the power supply. Therefore, the term throttle is also widespread. In addition to the ballast, the fluorescent tube requires a starter, which is responsible for ignition. Frequent side effects of fluorescent tubes are humming, humming and flickering.

The biggest criticism of classic fluorescent tubes is the mercury they contain. The heavy metal represents a health risk when the lamp breaks. In addition, it is not permitted to dispose of the lamps with household waste, as the materials they contain can lead to environmental problems. For this reason, fluorescent tubes must be disposed of by a specialised disposal company. The fluorescent tube’s long service life and good luminous efficacy at comparatively low energy costs speak in favour of it. With the LED light tube, however, there is now an alternative that offers similar light with fewer environmental hazards and even lower electricity costs.

The LED light tube does not work with gas, but generates the light through an (emitting) diode. If it is supplied with electricity, it emits light. LED fluorescent tubes do not contain toxic or otherwise problematic components. Although their acquisition costs are higher than those of classic fluorescent tubes, this also applies to their service life. In terms of light temperature, the fluorescent tubes hardly differ from each other any more. Like their predecessors filled with mercury, LED fluorescent tubes belong in hazardous waste. Here, however, not because of problematic ingredients, but in order to be able to reuse the valuable components for the electronics industry.

Replacing a classic fluorescent tube with an LED tube, however, does not require much effort. Manufacturers offer retrofit models that can be installed in existing lamps. As a rule, these models contain a so-called starter dummy, which replaces the starter of the classic fluorescent tube and enables the problem-free insertion of an LED tube light.

One of the most important criteria when buying a fluorescent tube is the colour temperature. It decides whether the light produced is similar to daylight or warm white creates a cosy atmosphere. The colour temperature has a decisive influence on people’s ability to concentrate. The following overview provides an indication of which colour temperature is recommended for which application: 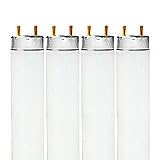 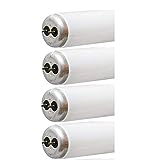