The digitalization of data has also changed the world of music forever. This also applies to the reception of radio stations. While more and more households used personal computers for private purposes in the early to mid-1990s, radio stations also started offering their first listening services on the Internet. The two broadcasters WXYC and WREK are regarded as pioneers in this field, having already started broadcasting their programmes via the Internet as an additional stream in November 1994. The fascination of Internet radio was also awakened in 1994, when the legendary rock band Rolling Stones put the first concert of a worldwide fan community live on the Internet to listen to. During the first years, listening to music stations from all over the world was only possible in medium wave quality due to technical reasons. There was reception via the analogue modem devices usual at that time. This changed with the new development of higher-quality broadband connections. The sound quality of the streamings could thus be significantly improved and the listening pleasure of Internet radio was convincing more and more conventional radio listeners. 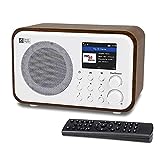 Local sounds from the Alpine region, rousing reggae vibes from the Caribbean or the country sound of the Wild West – with an Internet radio it is possible to receive music from all parts of the world. Even local stations with partly fancy programmes, which you can search in vain via conventional FM radios, are easy to reach via web radio. Tens of thousands of channels can now be received free of charge and legally. No computer is required for reception. The compact devices can therefore be set up at almost any desired location. Optically very similar to conventional radios, Internet radios enable reception in the kitchen as well as in the living room or garden. And in addition to digital reception, many devices can also reproduce the programmes of conventional FM radios.

A disadvantage of using modern web radios is the lack of a playlist to be created by the listener – only the stations can be selected with the device. Also the interaction with other web users, possible when using the radio programs via the PC, is omitted with Internet radio. When comparing Internet radio vs. VHF, the modern device sometimes comes off slightly worse in terms of connection speed. It can take a few seconds until the transmitter is clear and stable to receive. The maximum number of listeners of some stations can also be a problem. If the number of receivers specified by the transmitter has already been reached, the system will issue supposed error messages such as “Transmitter not reachable”.

Internet access via DSL is indispensable for receiving worldwide radio stations. Unlike the use of technically complex programs such as modern PC games, the speed of using an Internet radio does not play a role here. Much more important is the device’s permanent access to the World Wide Web. Internet radio stations constantly receive data, so the provision of the connection via flat rate is more than recommended. To connect the web radio to the WLAN (wireless network), the password for securing the connection must also be set on this device. However, a single typing is sufficient here. And to use the numerous channels, all you have to do is select from the preset list. New programs can also be added and favorite programs can be set.

In addition to receiving tens of thousands of stations on the Web, most modern Internet radio stations can also play music from a PC. Special models from Medion, Terratec, Freecom or Revo allow the reception of audio files from the computer via a network cable. A special playback program is required for particularly simple music playback. The widely used software “Windows Media Player” is recommended here. The following applies: all web radio stations can play popular formats such as MP3 and WMA without any problems. Depending on the selected model, further audio formats can be played. And also the connection of an iPod as docking station is possible with some devices. The connection to the stereo system is also optional. And via a simple USB connection, Internet radio stations can also access stored music tracks from mobile sticks or external hard drives. The Noxon 90elf model from Terratec, for example, offers a wide range of functions. Here even the coupling of several devices of the same type is possible. In this way, the reception of music tracks or programmes can be distributed throughout the entire apartment. This function is also practical for effective, individually adjustable sound reinforcement within a retail store. 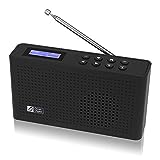 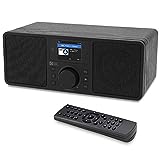