The primary function of an inverter is the conversion of DC voltage into, mostly sinusoidal, AC voltage. Some devices also additionally transform the input voltage upwards. This makes it possible, for example, to use 12 or 24 volts of direct current from a car battery to operate a device designed for 220 volts of alternating current. Depending on the circuit, an inverter can generate single-phase or three-phase (three-phase) alternating voltage. Models based on semiconductor technology achieve an efficiency of up to 98 percent (ratio of output power to input power). However, the use of an inverter is not limited to operating electrical equipment designed for AC voltage in places where only DC voltage is available. Rather, another important field of application today is the feeding of direct current, such as photovoltaic systems, into an alternating current or three-phase network 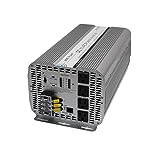 Electromechanically based choppers provide a rectangular output voltage which is then transformed. These devices can be regarded as the origin of inverter technology. However, they are susceptible to faults and are almost no longer used today. In motor generators, the DC voltage is used to drive an electric motor that drives a generator. The latter supplies the output voltage of the inverter as alternating voltage. The most commonly used inverters today are electronic devices based on semiconductor technology that operate on the principle of oscillators (oscillating systems) or astable flip-flops or multivibrators (systems that switch cyclically between two states independently or externally)

Self-controlled (also self-controlled) inverters control with transistors. They are also called island inverters. In these models, a clock generated by the device itself triggers the blocking and release of the current passage. Reference pulses from the power grid are therefore not required with this variant of the inverter and the devices themselves determine the phase position of the output AC voltage. In this way a so-called island network can be established. These are locally limited networks for the operation of electrical equipment without connection to a public power grid. The supply voltage for island networks is supplied by a rechargeable battery. Another important field of application is uninterruptible power supplies. Emergency power supplies also often function according to this principle.

Inverters controlled by an external power supply or mains power are usually also controlled by semiconductors, whereby in addition to transistors, thyristors (semiconductors for switching higher powers in one direction) or triacs (bidirectionally switching thyristors) are also used. One of the main areas of application for externally controlled inverters is feeding electrical energy into an existing AC grid. To ensure grid synchronisation, the existing grid controls the phase position of the inverter output voltage. A typical application example is the feeding of electrical energy from a photovoltaic system. Another main field of application for externally controlled inverters are so-called frequency inverters (often referred to simply as inverters). In these devices, the input voltage is an alternating voltage which is rectified and then operates an inverter. This allows AC voltage networks to be coupled that are not synchronized or are even operated with different network frequencies. A further field of application is wind turbines with variable generator voltage (due to changing speeds) and a DC link. 2-quadrant frequency inverters are used to recover energy when braking energy is used.

Depending on the form of the output voltage, inverters are divided into corresponding categories. Sine wave inverters are suitable for all common devices, such as switching power supplies, compact fluorescent lamps, LED lamps, TV, hi-fi systems and small electrical appliances. As a rule, these are sinusoidal voltages with low interference components, which are, however, unproblematic in these applications. Pure sinusoidal voltages for highly sensitive devices can, however, also be generated by high-quality inverters. The operation of rectangular and trapezoidal inverters can cause problems with many electrical appliances, especially household appliances that are controlled internally by triacs, such as some modern vacuum cleaners or coffee machines. They function only conditionally or often not at all when operated with rectangular or trapezoidal alternating voltage. As a general rule, inverters can generate single-phase or three-phase (three-phase) output voltage depending on their design.

The high efficiency of high-quality inverters depends on the output. If this is relatively small (e.g. with photovoltaic systems and cloudy weather) it can drop significantly with conventional inverters. However, special solar inverters are optimized in such a way that they operate highly efficiently across a wide range of power outputs. 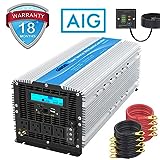 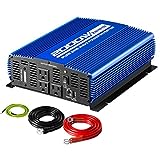 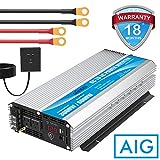 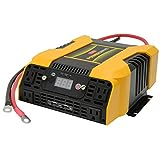