Bicycles in general and racing bikes with narrow tires in particular have been part of the street scene for centuries, but have long been unsuitable for off-road driving. In the mid-1970s the first races with modified city bikes took place in uneven terrain. Already in 1977 Charles Kelly developed the first bicycle that was specially designed for off-road use. The following decades brought various innovations, especially in the field of frame geometry and tyres. Resulting subcategories have special characteristics and are suitable for various applications. The differences are sometimes serious and start with the braking system: disc brakes provide optimum performance in almost any weather, while V-brakes minimise maintenance and overall weight.

Especially as a layman you think of wide tires and large spring travel when riding mountain bikes. So-called fullys, with front and rear suspension, are primarily suitable for difficult terrain and were developed for steep, impassable descents. The larger and more complex the obstacles, the better the components should spring. For this area, known as downhill, a bike may have a comparatively high weight and wide tires, as ascents are rarely manageable. For changing terrain there are alternatives, which are usually classified in the category Freeride. On slopes, long spring deflections provide sufficient damping, while on ascents many of the models used can be easily deactivated. This prevents the pedal movements from being “swallowed” by the suspension. Those who like to climb many metres in altitude will also find bicycles specially tailored to these needs. All-mountains are ideal when ascents and descents alternate frequently, while the Enduro category takes a middle course between freeride and all-mountain.

Not all mountain bikes today are sprung at the rear, as dampers can have some disadvantages: The stiffness of the frame is lost and even the most determined suspensions start to vibrate on planes, making progress more difficult. Categories, which are primarily designed for a quick start, therefore rely on lighter and usually cheaper available hardtails. The most popular use is cross-country, where impassable, mostly natural routes are used. Similar is the Biker Cross, where the minimalist mountain bikes ride over artificial tracks, which often consist of sand or earth with high bumps. Further areas of application for a rigid rear triangle are trial bikes, which often do without a seat completely or mount the saddle as low as possible. This is the freedom of movement that is particularly needed in the air, because Trial aims at spectacular movements and perfect control of the bike. The courses often consist of very high, narrow obstacles, which can be overcome by jumps and a sense of balance almost without a run-up. The advantages of hardtails therefore imply above all a low weight as well as a more direct transmission of the pedal movements to the bearing. The former can be further influenced by the choice of material.

For beginners, the choice is almost overwhelming, as the many categories are joined by various suspension systems and tyre widths. In principle, a large rolling surface with a deep profile makes progress more difficult, but offers much more safety on deep ground or obstacles. All in all, there is no getting around an in-depth study of the topic and a visit to the specialist dealer. Most manufacturers are convincing in different areas. The most popular brands, especially for freeride and downhill, are Cube and the American competitor Specialized. Like most competitors, both work closely together with suppliers, for example for the rear derailleur and brakes. Especially the manufacturers Shimano and SRAM are often noticed. In general, you should determine which terrain the mountain bike is mainly used for before you buy, and use this as a basis for your information. Even the circuit is crucial. It can have 30 or more gears or cannot be used at all to save weight. In summary, one usually has the choice between a light bicycle with acceptable technical weaknesses or a heavy all-rounder who, with sufficient effort, overcomes any obstacle.

Where the Trail Ends
Buy on Amazon 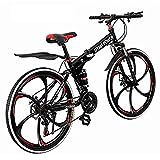 BC Sunshine Coast
Buy on Amazon