The times in which a way was searched with the help of a map or even an atlas are as good as over today. Modern technology has also brought modern possibilities for navigation onto the market. While navigation devices were only smiled at in the beginning, today they are available in cars, mobile phones or simply as portable devices on the market. But where are the differences between the different devices, how does the technology work and what should every prospective customer pay attention to when buying a new model? All these questions will be answered in detail in the following article. How do navigation devices work? Basically, it doesn’t matter what kind of navigation device they are. Whether an app on the smartphone or the classic system from the electronics market, the basic technology is always the same or at least very similar. The user of the device is located, i.e. his position is located as precisely as possible. Thanks to today’s technology, this is possible in the shortest possible time and to within a few metres. The user with his respective position is then displayed on a graphic map. Depending on the destination entered, the system then calculates the required distance over which the user can reach the destination. This is a globally available system for location. By means of a connection to (at least) three different satellites, the position of the terminal can be precisely determined. Today, a modern navigation device is not only used in cars for private purposes. The systems are used much more frequently for professional applications, for example in aircraft. Here, too, the systems, which are of course specially adapted and cannot be compared with a normal system for the car, ensure safe and fast navigation to the desired location. Modern technology for more functionsHowever, modern devices no longer rely only on the GPS signal, but are also often online today. Due to a good expansion with mobile radio networks in Germany, the systems access the Internet. Thus, not only can the position be determined, but additional functions can also be called up. For example, modern navigation devices constantly update traffic information via the Internet. Thus, the navigation device can, for example, warn of obstacles on the selected route, for example in the event of a traffic jam or similar. In this case, modern devices are also able to suggest a suitable and faster route to the user directly as an alternative. What should be taken into account when buying a new system? As the technology is the same for almost all systems as described above, there are no major differences when buying a new system. More important in this case is the choice of the right manufacturer. Even though the well-known discounters offer different systems almost every week and the extremely low prices seem very tempting at first glance, it would be better to invest a little more money here. Because maps are particularly important for a navigation device. If these are no longer up to date, no suitable route can be generated and displayed despite localisation. Accordingly, it is important to ensure long-term support when making a purchase. This is the only way to keep the cards up to date. Construction sites, new roads and other obstacles are also taken into account. Unfortunately, this long-term support is usually only guaranteed by the major manufacturers, such as TomTom. The particularly inexpensive devices from the discount store often do not receive any updates after 2 to 3 years, so that the installed cards become obsolete very quickly. It is also important to make sure that the available updates or new maps can be installed directly by the user and without additional costs.

Navigation device – The app for SmartphoneDAs more and more people today have an up-to-date smartphone, the classic navigation device is used less and less. Not only are the smartphones permanently connected to the Internet, almost all smartphones also have an integrated GPS chip, which enables them to locate the exact location in the shortest possible time. The app developers have of course also recognized this fact and for this reason make apps available to the user in the current stores that can certainly keep up with a normal navigation device. Sometimes even free apps are available here, but in this case they are financed by advertising. These apps also lead more or less reliably to the desired location and offer practical functions such as a traffic jam warner. In general, navigation devices in the car are of course completely legal and a very practical helper, especially when it comes to completely unknown areas. However, the driver in particular should exercise caution when operating the device. If, for example, a route is entered while driving, the view from the road to the display must of course be stapled. During this time, the risk of accidents increases enormously. In this case it is better to have the route entered by a possible passenger. If the driver is sitting alone in his vehicle, the device should be operated until a traffic light or a short stop should be made. Modern technology offers an alternative. Manufacturers, too, naturally want to increase the safety of drivers and all occupants. Accordingly, particularly modern models are already available on the market that can be controlled by voice input. The software is then programmed to recalculate a route, enter new destinations and more by voice command.

What equipment should the device have? Many manufacturers advertise their devices with a particularly extensive equipment with most different map material. In addition to the most important EU countries, maps of Russia and similarly distant countries are also included. However, these large card packages often cost considerably more. Accordingly, the user can check directly before the purchase which maps are installed and which of them are needed at all. If, for example, no trip abroad is planned in the next few years, a cheaper system with map material exclusively for the Federal Republic of Germany will suffice. This means that every user can save money directly. 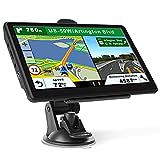