The 6 Best Petrol can

Our Top Petrol can Pick

A gas can like that is a useful thing. It is also known as a reserve canister or fuel tank. In general, a canister is a container for storing or transporting liquids. In the past, canisters were practically only made of metal (sheet steel). For example, from 1937 the well-known 20 litre canister, which was originally designed for the German Wehrmacht. Today, petrol canisters are mainly made of plastics such as polyethylene (PE) or polyvinyl chloride (PVC). Such petrol canisters are available in various versions with capacities of mostly 5, 10 or 20 litres. These canisters must comply with the guidelines of the Hazardous Goods Ordinance (GGV). They must be unbreakable, leakproof, childproof and tightly closed and stored according to regulations. Since most users carry petrol cans mainly as spare cans in their cars, it is important to observe the various foreign regulations. In general, for safety reasons, no more than 10 litres of petrol should be carried in the car (passenger car). In trucks, however, up to 60 litres are permitted in Germany. In Bulgaria, Greece, Croatia, Luxembourg, Romania and Hungary, no full petrol canister may be used in passenger cars at all. In Austria, for example, as in the Czech Republic or Portugal, petrol canisters with a capacity of 10 litres are permitted. This is also the case in Belgium, Denmark, France and Spain. Officially, it is said to be an appropriate quantity, which also means 10 litres. In Lithuania, Poland or Slovakia it may even be 20 litres, in Switzerland and Turkey up to 25 litres.

Petrol canisters must comply with DIN standards 7274 or 16904. The trunk of a vehicle is the best place to store and carry a petrol can. For safety reasons, the reserve canister should also be fixed. Basically, plastic petrol canisters have advantages over metal canisters. Above all, the significantly lower weight was decisive for the triumphal march of the plastic canisters. In addition, there are no residues caused by rust or the like inside a high-quality plastic petrol can. Whether stored in plastic or metal canisters, fuels can change over time. Changing ambient temperatures and other influences can reduce the quality of the fuel to such an extent that engine damage can result. It is best to use petrol that has been stored for a longer period of time after one year at the latest and replace the contents of the canister. It is very important that children do not have access to fuel. Toxic gases, fire and other hazards require extreme caution. If the lawnmower tank is filled from the reserve canister in the garden, it is possible that the petrol canister is standing around unsupervised. For this reason, fuel canisters should not be placed anywhere in the home, but rather in the garage or cellar, where they are best secured. It is dangerous to leave full petrol cans in warm rooms or even in the sun. The resulting internal pressure increases the explosiveness! To be on the safe side, petrol canisters should be used for a maximum of 10 years and then replaced with new ones.

The principle of safety always applies when handling petrol canisters. Practically all common spare canisters are suitable for lead-free and leaded petrol as well as diesel. Normally good petrol canisters have a carrying handle and a screwable lid. When filling a tank from the canister, nothing should go wrong. Therefore there are mostly inclusive, partly also as accessories, spouts or filler necks, which can be screwed on tightly. Special funnels are also useful. If a bleed valve or metering device is also available, the fuel can be decanted particularly easily and in a controlled manner. Special transfer pumps facilitate the transfer of fuel in emergencies. Well-known brands of petrol canisters and accessories include Arnold, Cartrend and Hünersdorff. For example, the Arnold 6011-X1-2001 metal canister 10 litres or the Cartrend 7740056 PVC canister 10 litres achieved very good test results. 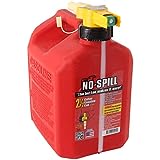 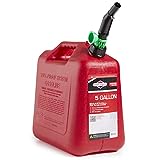 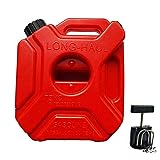 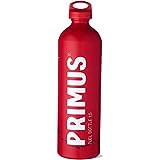