Pheromone traps are offered to combat clothing and food moths. They are intended to provide sustainable and non-toxic remedies for pest infestation. The fairly simple traps are inexpensive and their use is straightforward. But what are pheromones actually – and are these traps actually as effective as the manufacturers assure us?

Everything for the garden: pheromone trap Video Guide

A pheromone trap takes advantage of the fact that male dress or food moths are lured to their females by sexual perfume. These attractants are called pheromones. And with these fragrances a pheromone trap is interspersed. The trap is delivered sealed airtight. It unfolds its effect as soon as you open the pack. The species-specific fragrance is of course tailored to the particular pest. He can not be perceived by humans, but he is irresistible to the male insect. The male moths are therefore attracted by the smell and hang on the adhesive film of the trap. With prolonged use, all male pests die on the sticky surfaces and can not fertilize the females – and so over time, the entire population dies out.

Simple pheromone traps consist of a cardboard or paper strip with an adhesive film. Once the package is opened and the tape is exposed, the trap is active and can be placed close to the pest infestation. As a rule, the fragrance works between four and twelve weeks, at the latest then the trap should be renewed. An exchange is also useful if the adhesive force of the glue surface decreases or if a large number of pests have already been caught with the trap.

In addition to the once to be used cardboard traps, there are also reusable traps, which are mostly made of plastic. The adhesive strip in them can be easily replaced after some time. So the same trap can be used over a longer period of time. This is useful to control the development of a population or to prevent a new case. Simple moth traps are provided with adhesive strips and can be stuck in the storage or wardrobe. Some clothing moth traps have a hanging device and can be hung between clothes in the closet. For the control of non-flying pests such as bread or carpet beetle there are hinged cardboard boxes, which are provided on the inside with an adhesive surface. Here, the attracted males hang on the sticky surface as soon as they crawl into the trap.

A pheromone trap is not expensive and can be easily set up anywhere where the annoying animals have taken root. The attractant is imperceptible to humans, so the trap works odorless. Since no insecticide is used, the use is completely safe even for small children. The biggest advantage is that such a glue trap makes it possible to determine very quickly how strong the pest infestation is and how a population changes over time. Attention: Pheromone traps should not be used near open windows. Otherwise there is a risk that the insects are lured from the outside into the apartment. For the same reason, it is not recommended to overdose the traps. Observe the manufacturer's instructions for how many square meters a trap is sufficient for. A disadvantage of the pheromone trap is that only the adult male pests are attracted and caught. But it is the larvae that cause the most damage. A single control of pest infestation with pheromone traps is tedious: the success only becomes apparent when the male insects have been eradicated. This can take a long time with a heavy infestation. For a quick success, it is therefore recommended to use other control methods in addition to the pheromone traps. 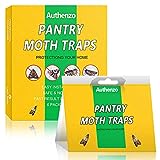 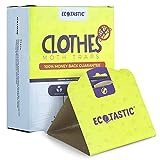 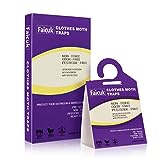