Wayfarers have long since achieved cult status. Used mainly as sunglasses in the 1980s, these glasses adorned the noses of Wall Street bankers, rockers and women alike. In recent years it has been experiencing a renaissance, both as optical and as chic sunglasses in different colors

The original Wayfarer comes from the hands of the American brand “Ray Ban”. They were also the ones who designed the iconic “Aviator”, a pilot’s spectacle, in the middle of the 20th century. The original Wayfarer frame first appeared on the market in 1952, designed by Raymond Stegeman and made entirely of plastic – which was a special feature for the time. Especially in the middle of the 20th century glasses were mainly made of heavy and thin metal frames. The thick temples of the Wayfarers were a contrast as well as the larger glass width and the striking bridge. In the last seven decades the Wayfarer has gone through many new developments and changes. Probably the best known variant appeared in the 80’s, whereby after the turn of the millennium a fundamental adaptation took place again, with which the Wayfarer became altogether somewhat smaller and slimmer.

Today the Wayfarer is still associated with the brand Ray Ban, but the name has long since emerged as a general description of the shape – similar to the drink “Cola” is no longer just the “Coca Cola” meant. As a result, eyewear enthusiasts can now buy a chic Wayfarer from many different brands and even at a low price. Because they don’t come directly from Ray Ban, their hangers don’t have the concise logo, and at the same time, of course, the exact dimensions differ. In addition to the pure frame, those interested should also devote their attention to the lenses, especially if they are sunglasses. Not all cheap Wayfarer models necessarily work with high quality UV protection glass, as one is used to from renowned brands.

First of all, the concise shape must naturally match the face. Several factors play a role here, so that the glasses actually fit well. First of all it has to be considered that this does not have any nostrils, but the bridge of the glasses lies directly on the nose. Men and women with thinner noses should therefore choose a model with a narrow bridge, otherwise the glasses could slip back and forth quickly. The original model works with a 2.2 cm long bridge bridge. If you plan to use optical lenses in a Wayfarer model, you have to realize that this model is not suitable for visual strengths above 3 to a maximum of 4 dioptres. This is due to the long bridge and the considerable height and width of the lenses. Glasses with high visual acuity would still become very thick and throw unattractive glass rings, even with strong refraction.

If you only want to wear them as sunglasses, you have to pay attention to adequate UV protection. High-quality lenses protect equally against UVA and UVB radiation. The quality of the glass can be attested, among other things, by compliance with the prescribed DIN standards. For sunglasses this would be EN 1836 as well as EN ISO 12312-1:2013. With an integrated polarization dazzling reflections can be further reduced, which is advantageous if you want to use the Wayfarer more often while driving. The colour of the sunglasses depends on your own taste. The classic Wayfarer uses black or black/green glasses with a color gradient. Cheaper models usually work with monochrome glasses, while Ray Ban still use this gradient with their Wayfarers. 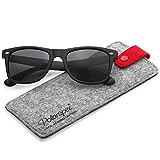 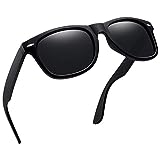