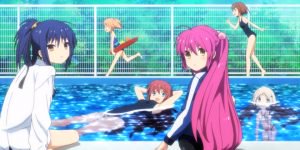 The people behind the anime adaptation of “Kud Wafter” recently announced that the publication of the crowdfunding anime will be delayed by one year. The film was scheduled for release in September 2019, but has now been postponed to September 2020.
In addition to the postponement, it was also announced that director Yoshiki Yamakawa was replaced by Kentarō Suzuki. The reason given for this was that the number of anime productions had increased, making it difficult for studios and staff to keep to schedules.
So that the quality of “Kud Wafter” does not suffer under the current circumstances, they decided together with the studio J.C. Staff to postpone the release.
“Kud Wafter” is Keys eighth visual novel, which appeared in 2010 in Japan for the PC. The story revolves around the students Riki Naoe and Kudryavka Noumi, whose friendship slowly develops into a romantic relationship.
The anime is the first part to celebrate the 10th anniversary of the “Little Busters! series”.