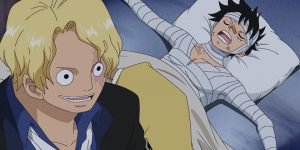 Some time ago “One Piece” creator Eiichirō Oda made special drawings of Sabo that show him once in a good timeline (drawings above) and in a bad timeline (below) at the age of 40 and 60 years. You can find the pictures below in the article.

Eiichiro Oda launched “One Piece” in July 1997 in “Weekly Shonen Jump” magazine. Shueisha has published 92 volumes in Japan so far. The manga is available here from Carlsen-Verlag.
Since October 1999, the anime adaptation of the manga has been broadcast on Japanese television, which now also includes 13 films and some specials. A new film entitled “One Piece Stampede” will be shown in Japanese cinemas from 9 August.
The latest episodes of the TV series are shown here in Germany on Anime on Demand and WAKANIM in the original sound with German subtitles in simulcast. The anime appears on the disc at KAZÉ.