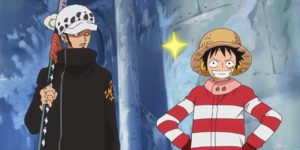 Even before Eiichiro Oda started his manga “One Piece” in July 1997, he published a collection of short stories entitled “Wanted!” in September 1996. Now the story “Romance Dawn”, which later became today’s “One Piece”-Manga, will get an anime special.
The special is scheduled for release in Japan on October 20, 2019. Exact details are still pending. A picture of the announcement can be found below.
The anime adaptation of “One Piece” has been broadcast on Japanese television since October 1999. A new film entitled “One Piece Stampede” will be released in Japanese cinemas on August 9.
The latest episodes of the TV series are shown here in Germany on Anime on Demand and WAKANIM in the original sound with German subtitles in simulcast. KAZÉ releases the series on DVD.
Announcement: