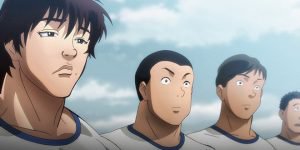 On the official website of the new anime adaptation of “Baki” it was announced today that the series will receive a second season, which will again be released worldwide by video-on-demand provider Netflix. Exact details on the new episodes are still pending.
The first season was animated at Studio TMS Entertainment under the direction of Toshiki Hirano (“Magic Kaito: Kid the Phantom Thief”). Fujio Suzuki (“New Getter Robo”) was responsible for character design, while Tatsuhiko Urahata (“Horizon in the Middle of Nowhere”) was responsible for series composition.
The first “Baki” anime was released here on DVD by peppermint anime. Later, the series was also shown on ANIMAX and ProSieben MAXX on German television. The first half of the new anime adaptation has been available on demand at Netflix with German and Japanese voice output since December 2018. The second half will be published tomorrow.
>> To the series at Netflix
>> Order “Baki” on DVD
OmU-Trailer: