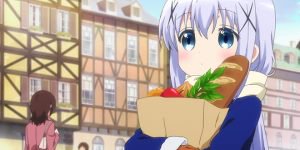 Several months ago it was announced that “Is the Order a Rabbit?” (Japanese: “Gochuumon wa Usagi desu ka??”) will receive a third season and another OVA. Now a first visual of the new OVA has been released, which you can view below in the article.
The OVA will be called “Is the Order a Rabbit?? ~”Sing For You” and will be released in Japan in the fall of 2019. The start of the third season is still planned for 2020. Further details are not yet known.
The twelve-part first season was shown on Japanese television in spring 2014. In autumn 2015 a second season followed, which also consists of twelve episodes. The one-hour OVA “Dear My Sister” was released in November 2017.
Visual:
That’s what this is about:
It is spring and Cocoa arrives in the place where she will go to high school. There she gets lost and enters a coffee shop called “Rabbit House”, which turns out to be her new home. All characters are incredibly cute – the small but serene Chino, the soldaten-like Rize, the friendly and very Japanese Chiyo and the elegant but modest Sharo. They are accompanied by Chinos classmates Maya and Megu, as well as the regular customer Aoyama Blue-Mountain. Everything at Rabbit House is so cute every day!