There is a bandage scissors in every first-aid kit for passenger cars. It is also an important part of a medicine chest. As the name suggests, bandage scissors are a special medical instrument used to cut bandages. Removing bandages by cutting them with bandage scissors is, however, only one area of application. Bandage scissors are also used to cut garments that cannot be pulled out. For example, injured parts of the body can be exposed and treated as quickly as possible after an accident. Bandage scissors are available in numerous versions with different lengths, made entirely of metal, with plastic handles, straight or angled. The Lister scissors, named after their inventor, are the classic bandage scissors. They are used in practically every hospital and in every medical practice. Lister shears have some special features compared to conventional shears. Both ends of the shearing blades are blunt in a Lister shear. The upper shear blade is shorter than the lower shear blade and is rounded towards the cutting edge. The lower shear blade is laterally thickened and flattened. The lower, flattened shearing blade can thus be pushed under a bandage or garment without risk of injury and the fabric can be severed. In order to have sufficient clearance downwards towards the patient during the cutting movements, the handles of Lister scissors are angled upwards by approx. 30 degrees to the scissor blades. The handles point upwards at an angle, while the lower shearing blade lies flat. Lister bandage scissors are available in lengths from approx. 110 to 200 mm. Professional Lister Shears are made entirely of stainless steel and can be chemically or autoclaved for sterilization. The blueINOX bandage scissors are Lister scissors with angled handles and large grip eyes for professional use. The stainless steel scissors can be easily sterilized and disinfected in an autoclave or with alcohol-based disinfectants. The total length of the scissors is 18.5 cm. Professional bandage scissors made of forged stainless steel are comparatively expensive. If you still want to buy bandage scissors for your medicine chest or a first aid kit, the trade offers much cheaper bandage scissors made of punched stainless steel sheet. These bandage scissors are usually short and equipped with grip eyes made of injected plastic. Due to the wider plastic handle eyes, these scissors fit slightly better in the hand. However, due to the shorter handles, the cutting performance is lower than with the long Lister scissors. To stiffen the relatively thin sheets, the punched bandage scissors have elongated depressions, so-called beads, in the handles and shearing blades. Although these recesses provide a certain stiffness, it can nevertheless happen with these shears that when thick material is to be cut through, the shear blades separate and cutting is therefore no longer possible. For this reason, punched bandage scissors are not used for professional applications. For the medicine chest or a first aid kit, however, the quality is completely sufficient. The punched bandage scissors from NCD Medical are equipped with plastic grip eyes. The lower grip eye is elongated like household scissors and suitable for two fingers. The scissors have a total length of approx. 14 cm and are available in various colours. Regardless of which type of bandage scissors you choose, the scissors should always be treated with care. An important point is to use the scissors only for cutting bandages or other textile materials. If bandage scissors are used for a purpose other than that for which they were intended, for example for cutting paper or cardboard, any bandage scissors quickly become blunt and cutting clothing and bandages is virtually impossible. This is because paper or cardboard are much harder than fabric. For the medicine chest it does not necessarily have to be a professional bandage scissors. An inexpensive bandage scissors with comfortable plastic handles is perfectly sufficient. Important are the angled shape according to Lister and the longest possible handles for effortless and fast cutting. 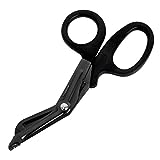 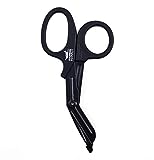 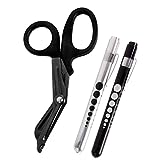