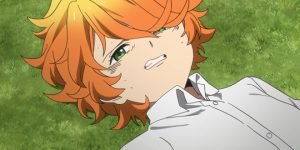 Just a few hours ago we reported that the anime adaptation of “The Promised Neverland” will receive a second season that will be broadcast on Japanese television in 2020. Now an announcement video has been published, which you can watch below in the article.
The first season was directed by Mamoru Kanbe at Studio CloverWorks. Toshiya Ono was responsible for the series composition, while Kazuaki Shimada contributed the character designs. Takahiro Obata was responsible for the music.
“The Promised Neverland” by Kaiu Shirai and Posuka Demizu has appeared in Shueisha’s “Shuukan Shounen Jump” magazine since 2016 and currently comprises twelve volumes, of which there are now more than 10 million copies in circulation. The Manga is available here from Carlsen-Verlag. The anime adaptation is shown by WAKANIM in the original sound with German subtitles in simulcast.
>> To the series at WAKANIM
>> To the series at Anime2You
>> Order Manga at Amazon