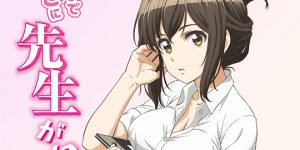 On the official website of the anime adaptation of “Why the hell are you here, Teacher!?” (Nande Koko ni Sensei ga!?) today announced that the first four episodes of the series will accompany the seventh manga volume in an uncensored version. The release is planned for July. On Japanese television and with streaming providers, the anime is only shown censored
The series is directed by Hiraku Kaneko (“Tsuredure Children”) at Tear Studio (“Lord of Vermilion: The Crimson King”). Kazuhiko Tamura (“Gunparade Orchestra”) adapts the character designs for the animation. The opening is by Sumire Uesaka. Each episode will be about 15 minutes long.
Soborou has been publishing the series in “Young Magazine” since October 2015. Kodansha has so far published six volumes, more than 500,000 of which are now in circulation. The anime adaptation will be broadcast on Japanese television from 7 April.
Promo video:
Action:
The 17-year-old Ichirou Satou is an average teenager who always finds himself in perverse situations with his teacher Kana Kojima. The story follows this erotic love comedy about her misadventures in her everyday life.