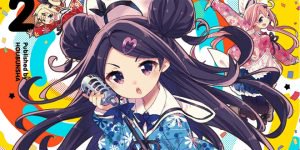 Only yesterday it became known that the manga series “Dropout Idol Fruit Tart” (Japanese: “Ochikobore Fruit Tart”) by Sou Hamayumiba will receive an anime adaptation. Now the production team as well as a first visual have been unveiled, which you can see below in the article.
Accordingly, the series is created in the feel studio. “(“Hinamatsuri”) directed by Keiichiro Kawaguchi (“ISLAND”, “OniAi”), who is also responsible for the serial composition together with Tatsuya Takahashi (“Eromanga-Sensei”). Sumie Kinoshita (“A Sister’s All You Need”) takes care of the character designs.
“Dropout Idol Fruit Tart” has been published by Houbunsha since 2015 and currently comprises three volumes. The manga is not available here yet. It is not yet known when the anime implementation will start.
Visual:
Action:
Fourth residence of Rat Production (commonly known as Nezumi-sou) – the place where discarded idols live: former children’s actress Sekino Roko, musician Nukui Hayu and model Maehara Nina.