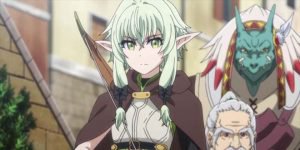 Already at the end of the last episode of the anime adaptation of “Goblin Slayer” it was announced that the series will “return”. It has now been announced that this is a new episode entitled “Goblin’s Crown” which will be shown in Japanese cinemas. You can see a first visual below in the article. Further details are not yet known.
“Goblin Slayer” was created in the studio WHITE FOX (“Re:Zero”) under the direction of Takaharu Ozaki (“Girls’ Last Tour”). Hideyuki Kurata (“Made in Abyss”) wrote the script together with Yousuke Kuroda (“My Hero Academia”), while Takashi Nagayoshi (“Girls’ Last Tour”) was responsible for the character designs.
The series will be shown every Friday at 22:30 on the free TV channel ProSieben MAXX starting tomorrow during Anime Night. All episodes are completely uncensored and broadcast with German dubbing.
The first DVD and Blu-ray volume will be released on March 29, 2019 with German and Japanese voice output by AniMoon Publishing. The other volumes will follow every two months.
>> To the series at WAKANIM
>> Order Manga at Amazon