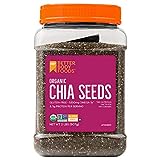 The Chia, also called Mexican Chia, is a plant of the family of labiates, which is widespread in Guatemala and especially in Mexico. Strictly speaking, it is a species from the genus Salvia, i.e. a sage species. The scientific name of the Mexican Chia is Salvia hispanica. The reference to Spain as the country of origin is based on an error by the descriptor Carl von Linné. He described and named the plant in 1753 and started from a Spanish origin, since the Chia had already been imported to Europe at that time and was widely cultivated in Spain. The Mexican Chia is an annual herbaceous plant that grows to a height of 1.75 m and bears blue, rarely white flowers. But the real purpose of growing Chia is to extract the seeds. These have become one of the new superfoods due to the number and quantity of their ingredients as well as their possible use for many different things and are enjoying growing popularity.

The Mexican Chia produces at the end of the growing period of about 100 to 150 days and before it dies a large amount of seeds. The seeds are elongated oval, only 2 mm long and 1 mm thick and have a beige ground colour with irregular brown spots. Like many other plant seeds, they are very rich in various nutrients. The seeds are mainly very fatty and consist of about 38% of the so-called Chia Oil. This contains to a large extent from the particularly healthy Omega-3 fatty acids as well as the likewise very healthy Omega-6_fatty acids. The composition of Chia oil consists of 60% of the omega-3 fatty acid alpha-linolenic acid and up to 26% of the omega-6 fatty acid linoleic acid. The remaining 14% of Chia oil consists of about 4% of other healthy omega-9 fatty acids and 10% saturated fatty acids, with palmitic acid making up the largest portion of the remaining 14%. 62% of the Chia seed composition consists of about 18 to 23% protein, which contains all 8 essential amino acids, and about 40% carbohydrates, which make up over 30% of the dietary fibre. The most important of these ingredients are each calculated on 100 g Chia seeds about 860 mg phosphorus, 630 mg calcium, about 400 mg potassium and 330 mg magnesium. In addition, the seeds contain iron, manganese, sodium, copper and zinc. The main vitamins contained are with 8.8 mg vitamin B3, 1.6 mg vitamin C, 0.6 mg vitamin B1 and 0.5 mg vitamin E. Further vitamins contained are vitamin B2, B3, A and folic acid. 490 kcal or a good 2030 kJ per 100 g of calories are added. Many of the ingredients already reach 50% or more of the recommended daily dose for an adult. Since manganese and phosphorus exceed the recommended daily doses, the amount of Chia consumed should be considered carefully.

Chia is promoted as a superfood and seeds are said to have a number of health-promoting effects. The fact is, however, that Chia has been approved as a dietary supplement, but positive health effects have not yet been proven, and that such statements are at best based on circumstantial evidence and assumptions. Chia should therefore not be regarded as a medicinal plant or anything similar! The truth is also that due to the high levels of phosphorus and manganese, excessive consumption should be avoided. The recommendation of the European Food Safety Authority EFSA states that the seeds can be considered as safe, but the permissible proportion in bakery products is limited to 5% and the recommended daily dose for adults is 15 g, which corresponds to about one tablespoon. Considering the small amount of the ingredients supplied in this way, the occurrence of any health effects is at least very questionable. A positive effect that cannot be denied is the satiating effect of Chia seeds. However, this effect is not based on the ingredients themselves, but only on the purely physical swelling process. However, this is not an exclusive characteristic of Chia, but occurs more or less clearly in many plant seeds. The seeds absorb liquid from their immediate environment and expand many times over. Chia seeds form a gelatinous protective layer, the glycocalyx, which is much more voluminous than the dry seed and the absorbed liquid together. Strictly speaking, the increase in volume is 1100%. This means that a tablespoonful of dry seeds in the stomach expands to a volume of 12 tablespoons. This results in a volume of 180 ml at the recommended daily dose of 15g. This corresponds to about 2/3 of a soup plate with only about 70 kcal. The resulting possibilities for a diet are enormous. However, the correct preparation and the time at which Chia is eaten are very important.

When buying the first Chia seed packs, the first question is what to do with them. Since it is a so-called superfood, the Internet is full of recipes and possible applications. Many of them are recommendable, but they are not equally suitable for every desired goal. If one hopes for a health-promoting effect of the ingredients and therefore takes the seeds as a food supplement, it is possible on the one hand to cook or bake with them. However, as the majority of vitamins are destroyed and only heat-stable ingredients are retained, such a preparation is only recommended to a very limited extent. This naturally also applies to finished baked goods, which are no adequate substitute for the purchase of fresh Chia seed packs. It makes much more sense to use the seeds raw. There is the possibility to process them unswollen or swollen. Both methods are recommended equally, although pre-swelling is preferable when used in food with low liquid conduction. It is important to let the Chia seeds swell long enough so that the glycocalyx can absorb a maximum of liquid. The recommended time for this is one hour, even if the majority of the swelling process is completed after about 10 minutes. Pre-swollen Chia seeds, for example, can be stirred into yoghurt or added to drier salad recipes. The use in dry condition is possible in smoothies or in salads with a lot of dressing. For the use as a slimming aid, pre-swollen seeds are spoken of in the vast majority of sources, but this is wrong. Apart from the fact that eating almost a glass of slimy seeds is hardly a pleasure, it is already almost a whole meal. In addition, the stomach is hardly required and the available stomach acid remains unused in the stomach, which can lead in the long term to acidosis, heartburn and other problems. In fact, it is absolutely necessary to eat the seeds unswollen. Eaten about 10 to 20 minutes before the main meal, the seeds have enough time to swell up and give the body a feeling of satiety. At the same time, they swell through the absorption of excess gastric juice and thus prevent the problems already mentioned. 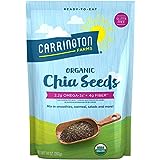