Laminate and parquet are among the most popular floor coverings for the home. They are robust, have a noble appearance and have a number of advantages over carpets. Nevertheless, wood, laminate and many other hard floor coverings have the big disadvantage that they can scratch. This happens above all when the finest dirt gets under hard, heavy objects, such as furniture, and is pressed against the floor covering by these objects. If these items are also moved, fine grains of sand and other dirt particles are dragged across the floor, causing scratches. While parquet can still be restored to repair damage, white scratches, especially in laminate flooring, are left behind in the worst case, which are visible from afar and can at best be concealed but not removed. For these reasons, scratches should be avoided from the outset. Since the finest dirt particles, even dust, are always present, regardless of how thoroughly the floor is cleaned, there is a solution to this problem in the form of felt gliders.

The problem with scratching floor coverings is not the dirt itself, but the fact that it scratches over the floor. This happens especially when dirt gets under the hard feet of furniture, mostly made of wood or metal. Here the dirt is trapped between the hard furniture foot and the hard floor and can damage the floor. Felt glides act as buffers at this point. Since complete cleanliness simply cannot be achieved, damage must be prevented. Scratches occur in particular when the dirt particles, such as sand, are harder than the floor. This allows them to drill themselves into it and cause unattractive scratches. Since felt glides are made of dense but soft fabric, dirt is not pressed into the flooring under load, but into the felt, minimising pressure on the floor and preventing scratching.

Felt glides are available in a number of variations. These all function identically, but have certain quality differences which make them better or worse suited for certain applications. The simplest form are felt glides for gluing on. They consist exclusively of a piece of felt and an adhesive applied to one side, which holds the glider at the furniture foot. Other models are nailed or screwed to the furniture base. They consist of the felt and an additional support, on which the felt is applied and which holds the nail or screw. Since felt frays at the edges, especially on chairs and other, frequently moving furniture, there are somewhat higher quality versions whose second layer is not a flat disc, but has a recess into which the felt is slightly sunk and protected from fraying. It is important that not all of these designs are equally suitable for all pieces of furniture, but some felt gliders are better and others are bad or even not at all suitable.

Which felt glider is suitable depends very much on the piece of furniture. If a piece of furniture is very heavy and is not intended to move much, as is the case with large tables, armchairs or sofas, the felt glides do not have to be excessively stable, as they do not fray with little movement. Here simple felt glides are sufficient for gluing on, whereby the weight of the furniture has to be considered and the felt should be as thick as possible. For chairs, side tables and other furniture that is moved more often, felt glides should be selected that can be screwed or nailed down. Such a compound is more stable than a thin layer of adhesive. Of course, the fastening is only possible if the furniture feet are not made of metal and make screwing on impossible. 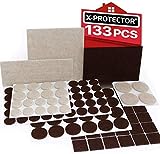 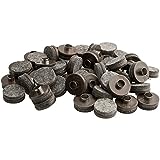 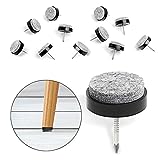