Everybody knows these diseases and has had them before – flu or cold. Especially in the cold season, these diseases are just as much a part of it as the snow. A tried and tested method of effectively combating coughs and colds is inhalation over the pot. Inhalation is not only effective against colds, but also against skin impurities and skin diseases. It also has a beneficial effect on irritated eyes and even on middle ear infections. However, inhalation is mainly used to treat colds and inflammations in the sinuses, mouth, throat and paranasal sinuses. The best known method is inhalation over a bowl or pot. To do this, hold your head above it and cover your head with a towel. During inhalation, the water vapor rises and wets the entire face with tiny droplets of water. When inhaled, these water droplets also reach the mucous membranes. However, the steam does not pass through the vocal folds. As a result, inhalation has hardly any effect on the bronchi and lungs.

Nowadays there are many more methods of inhalation than just above the pot, including the steam inhaler. This actually works the same way as the tried and tested method above the pot. Here, too, the water vapour rises and moistens the mucous membranes with tiny water droplets. Since a mask is used in this method, the steam inhaler only works on the mouth and nose area and not on the whole face. The simplest variant of steam inhalers is the bowl with attachment. If you hold it at an angle or tilt it over once, the water vapour is distributed over the pot in the same way as with the tried and tested method. Denser steam inhalers are safer in this respect, but must also be filled with hot water. The most modern variant of steam inhalers is the electric one. Here the water is heated by the steam inhaler itself. Even if a steam inhaler is limited in its effect by the mask, it also has its advantages. Especially adults and children with a sensitive reaction to steam will benefit. However, there are also skin diseases in which the skin must be kept dry. The use of a steam inhaler is optimal. In addition, certain inhalation additives may have an irritating effect on the eyes. With a steam inhaler, the eyes are spared.

1. Ultrasonic nebulizer:This is a device that converts electrical vibrations into mechanical vibrations that are then transmitted to the water. This results in a fine water mist, whose water droplets are even smaller than those of water vapour. This allows these water droplets to penetrate deeper into the airways via the vocal folds and trachea to the lungs and bronchi. As salt and additives do not remain in the container, but also get into the respiratory tract, the use of additives and salt should be handled more sparingly and cautiously. The ultrasonic nebuliser is advantageous in the treatment of pneumonia, bronchitis and sinusitis.2. Nebuliser: This is the second variant of inhalation nebuliser. The fine mist, however, is produced by compressed air. This is guided by a solution. Figuratively one can imagine its functionality as follows. One blows through a straw into a water glass, whereby air bubbles rise and take along liquid. A jet nebuliser is also suitable for the treatment of pneumonia, asthma, bronchitis and other diseases of the lower respiratory tract. Here too, however, the dosage of additives and salt must be taken into account.

Each method of inhalation has its advantages and disadvantages. A steam inhaler is excellent for removing mucus, especially in the upper part of the respiratory tract. In addition, the water vapour stimulates the blood circulation. The disadvantage of the steam inhaler is its range of application. By the use of a mask this is limited only to the nose and the mouth. 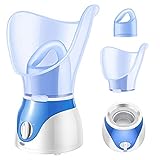 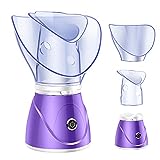