The fly swatter is a utensil that – as is generally known – is used to kill flying insects such as flies or mosquitoes. Especially advantageous is their non-toxic and cost-effective effect. One of the most famous and popular inventions of modern times! Small beasts like flies, mosquitoes and wasps can rob you of sleep and reason. 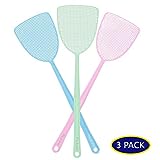 The first plastic constructions of the fly swatter were made by Stuttgart inventor Erich Schumm. In 1953 he applied for a patent for his invention. Even then, the fly swatter corresponded to what we imagine it to be today. Although simple in construction, the fly swatter still challenges man’s inventive spirit today. The fact that the insects are crushed with a fly swatter is always perceived as a disadvantage. In this way, it can happen that their body fluids contaminate substrates such as fabrics or wallpaper lastingly. Developments such as fly swatters, in which the insect is killed but not crushed to prevent the fly or mosquito from bleeding, were the result. Other developments focused on the size of the fly swatter. An inventor developed a particularly small, compact form with which insects can also be “clapped” in corners or hiding places.

The development of the Utensils fly swatter goes far back into the past. The first fly swatter was a rifle-like fly swatter by Markus Heidbreder (1922). This was followed by the well-known and popular fly swatter by Erich Schumm, whose patent describes the most common form of fly swatter still in use today. In 1998 Bodo Maier registered his compact and very short fly swatter for use in corners and angles. Georg Draser developed a fly swatter that does not crush insects such as flies, mosquitoes or wasps (2004). A fly swatter handle was notified in 1996 to avoid contact with killed insects during their disposal (1996). This invention comes from Slavko Schön. Also available is a fly swatter with replaceable, air-permeable adhesive net (2003). This fly swatter with glue on the striking surface is not meant to kill, but only to catch. The invention was made by Viktor Solokow and Mariusz Nawrocki

One of the best known and most popular modern inventions in the field of fly swatters is the electric fly swatter. It is intended to counteract the disadvantages of conventional fly swatters made of wood or plastic. It usually consists of one or more round or oval electrically conductive networks. These are surrounded by an electrically insulating edge. A battery in the fly swatter handle conducts a high voltage into the network or networks. In this way, insects are killed by contact with an electric shock. With an electric fly swatter, small beasts such as flies, mosquitoes or wasps can be killed quickly and effectively – without soiling the walls. The electric flycatcher looks like a small tennis racket with a metal grid. The handle has a battery compartment for two conventional R6 or AA batteries. Next to it there is a button that you have to keep pressed while hunting for the little pests. If you catch them with the racket, they are “fried” and fall to the ground – at about 1,000 volts. You shouldn’t be frightened when there’s lightning or a bang. Also it can come to the emergence of unpleasantly smelling smoke. Fortunately, this only lasts for a very short time. By the way: For humans the blow of the insect Schröters is not pleasant, but completely harmless. In order for the utensil to develop its full effect, it should always be equipped with new or fully charged batteries. Weakly charged batteries do not produce a sufficiently strong impact, so that the insect may only be injured or stunned. No use cruelty to animals! Electric fly swatters are available from many different manufacturers. The prices range between 3 and 10 Euro.

Especially in the hot, sometimes humid summertime small, humming pests prepare for the air raid. A fly swatter is a suitable defence against flies, mosquitoes and wasps. The well-formed utensil is THE means to achieve air supremacy in all situations and occasions. No matter if with or without battery operation: The striking surface of a fly swatter gives it momentum and power. Particularly popular and therefore recommendable: the insect Schröter 7901 from Geschenk-Himmel, the plastic fly swatter from Kingfisher and the electric flycatcher from Beco. 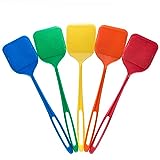 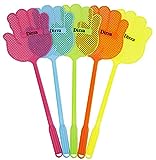 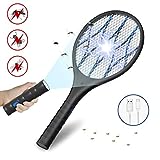