Popular medicinal and spice plantThe peppermint probably originated from a coincidental crossing of forest and stream mint. It was discovered in 1696 by the English biologist John Ray. The individual types of peppermint differ in their taste as well as in their natural content of ingredients such as peppermint oil, menthol and carvone, flavonoids and labiate tanning agents. In 2004 the peppermint was medicinal plant of the year. It has been cultivated since 1750, at that time mainly in England. In Germany there are smaller cultivation areas in Bavaria, Thuringia and the Upper Palatinate. In the Bavarian community of Eichenau there is the only German peppermint museum. The Peppermint Railway travels between Straußfurt in Thuringia and Großheringen to transport the harvested medicinal herbs. The true propagation of the variety for cultivation can only take place via seedlings. The dark green variety “Mitcham”, also known as “black mint”, is sought-after. The light green peppermint is called “white mint”. The hardy plants reach a growth height of 30 to 90 cm. Its leaves are harvested twice a year. Once before flowering, which takes place from June to August. And another one in the fall. However, a higher quality is achieved with the first harvest. The herb recedes in the autumn and sprouts again in the spring. The leaves of the spice plant smell strong. They taste pleasantly spicy, which is why their name peppermint comes from. They are often used fresh or dried as tea, which is a national drink in Arabic and North African countries. It is possible that the cooling and refreshing effect of the plant plays a role. The effect of peppermint teaFor the preparation of a tea, fresh or dried leaves are poured into the tea bag or tea filter with boiling water. Then the tea is infused for about 10 minutes in a covered cup so that the essential ingredients cannot evaporate. Peppermint tea has a disinfecting effect against microbes and viruses due to its menthol content. This is why tea is often used for inflammation of the mouth and throat, sore throat and cough. For colds it clears the respiratory tract. Drunk before going to bed, peppermint tea can soothe and promote sleep. It helps to relieve stomach and abdominal pain, flatulence and menstrual cramps, gastritis and diarrhoea, nausea and nausea. Peppermint tea promotes the formation of bile, but beware! Peppermint tea is not always helpful. Sensitive people can be allergic to peppermint. Since the plant stimulates the formation of gastric acid, people with heartburn and reflux esophagitis (reflux of gastric acid into the esophagus) should avoid the drink. Even during pregnancy, peppermint tea should only be drunk a little. Large quantities of tea stimulate the uterus, so there is a risk of miscarriage. As the ingredients in peppermint oil are even more concentrated, it is generally not advisable to use them during pregnancy. Peppermint tea also has a weaning effect. It can inhibit milk formation and milk flow. This is why tea is also not recommended for nursing mothers. Mothers who want to stop breastfeeding know about the effects of peppermint tea from their midwives and drink plenty of it. Despite individual or short-term restrictions, peppermint tea is a popular tea among Germans. According to the latest findings, the aromatic mint taste should also help you lose weight. Since the medicinal herb stimulates the fat metabolism and the liver, stomach, intestines and gall bladder, cravings should be less frequent after the consumption of peppermint tea. PURE Tea Peppermint was tested as the best peppermint tea. Followed by Eilles peppermint leaves, Premium peppermint 20 of teapot, Peppermint loose of Sonnentor, Peppermint tea of Tee-Meyer and Naturex 24 peppermint leaves cut. 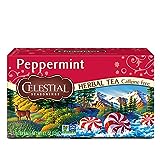 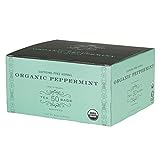