Today, loudspeaker systems are offered in a wide variety of sizes, shapes and colours. In addition, of course, they also differ in quality and sound, so that it is often very difficult to make a decision here.

Nowadays, loudspeakers and their sound systems can be used in a wide variety of ways. Therefore, you should carefully consider how to use the speakers before purchasing them. For example, are the speakers designed for the computer, home theater system, or “just” for listening to music? Depending on this, different boxes in different numbers can be considered, as these differ from each other in terms of their channel technology. With home cinema systems, for example, this is often Dolby Surround and with music systems stereo. However, channel technology is important if you want to benefit from a good sound.

If stereo loudspeakers are required for listening to music, then a single loudspeaker is sufficient for existing mono technology, whereas two loudspeakers must be available for stereo playback. It’s a completely different story if you’re interested in a speaker system for home cinema. For example, Dolby Surround and Dolby 5.1 require several loudspeakers that are distributed throughout the room for a better sound experience. Usually such a sound system consists of five channels, which normally require three frontal and two surround speakers, which are connected to the back of the speakers. If you own Dolby 5.1, you also need a bass speaker.

First of all, it is important to note that there are both passive and active loudspeakers. The difference is that the active loudspeakers already have an integrated amplifier. On the one hand, this is advantageous because it requires significantly fewer cable runs and, on the other hand, results in a better sound quality. Because the longer the cable, the more the sound suffers. However, such loudspeakers are usually much more expensive. Passive speakers, on the other hand, are connected to an extra amplifier. When buying a loudspeaker system, you should not only pay attention to how much watts such a speaker has, but it is also advisable to consider its efficiency, which is indicated in decibels. It can be assumed that the higher the efficiency, the louder the loudspeaker. Also very important is the workmanship of the loudspeakers, as this affects the sound quality. And of course you shouldn’t miss to check the loudspeaker sound. But it is also best to take a look at the drivers, because the more drivers there are, the clearer and clearer the sound is. Furthermore, the ohm values given by the Greek symbol “Omega” are very important. The ohm values represent the resistance. The output resistance of a loudspeaker must be the same as that of an amplifier. If the value of the loudspeaker is lower than the value of the amplifier, both devices can suffer significant damage. The other way around, it’s almost the same. If the resistance of the loudspeaker is too high, it is possible that the loudspeaker will be damaged at higher volumes. 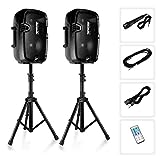 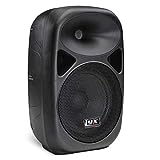