Classically the olive oil soap is offered in a block form. Under the brand Jislaine there is a handmade and vegan product from Syria. Arabia is the actual birthplace of fine and mildly caring soaps in soap production. The few manufactories around Aleppo work according to the ancient craftsmanship of multiple boiling. A cold-pressed olive oil is used for the soap production. The saponification process takes place in the boiler oven at 95 degrees Celsius. After production, the finished soap pieces rest for about 9 months in a well-ventilated room. They lose a lot of weight in the process. After ripening, a piece of soap in a yellow-brown colour remains of the initial green colour. This soap is suitable for the gentle cleansing of body and face. The company Marius Fabre offers a universally applicable household soap in liquid form. The ready-to-use bottle with spray head contains undiluted soft soap. An oil of ripe, black olives is admixed. This purely natural product can be used effectively to combat plant pests in the home and garden, among other things. The first references to soap production can be found in the Sumerians. They recognized that ash from plants mixed well with oils and had special properties for healing purposes. The Egyptians and Greeks adopted the production process that was widespread at that time. Only the Romans recognized the cleaning power of soap. Lye and oil were boiled by the Arabs from the 7th century onwards. At that time, the soap was given its block shape, which is still used today. During the conquest, the knowledge of soap production penetrated further into Europe. For a long time, soap was also used as a detergent in the care of clothes. However, since it forms so-called lime soaps in harder water, which remain insoluble on the laundry, it has now been replaced by modern detergents. France and Spain are the main production countries for olive oil soap. They are mainly offered as fine soap for body care or as so-called toilet soap. The variety of guest soaps is almost infinite. Today the traditional olive oil soap is made from water, soda and olive oil. The natural soaps are free of perfume and preservatives. Since the molecules of olive oil are small and particularly fine, they are well distributed on the skin. Cleopatra knew about the special characteristics and rubbed herself with olive oil before bathing. Because the oil has refatting and antiseptic properties like the natural acid mantle of our skin. This is why olive oil soap is particularly suitable for people with sensitive or diseased skin. If you want to produce olive oil soap yourself, you need 1.1 litres of olive oil, 140 g of caustic soda solution and 350 ml of water. Normal, distilled or rosy water is suitable for soap production. Water and caustic soda lye are mixed and heated. Stir for 2 minutes and allow to cool to room temperature. Carefully heat the olive oil to room temperature. Now add the cooled lye liquid to the olive oil and stir until a creamy mass is obtained. Pour this mixture into a mould, cover and allow to harden. Once the block is solid, it can be cut. The self-produced olive oil soap should mature for a further 6 to 8 weeks. It reaches its best quality in 3 to 6 months. The soap can be supplemented with St. John’s wort, cream, honey, lavender or rose petals as desired during the manufacturing process. 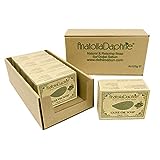