When outside temperatures rise, drivers increasingly complain about black tar spots on their cars. With strong sunlight and great heat, the road surface warms up and increasingly softens. Driving cars over the pavement, small parts of the asphalt come loose and stick to the car tires. These in turn throw the black lumps into the air during the journey and distribute them on the fenders and doors. By driving trucks ahead, they can also land on the hood and even on the roof. Removing tar stains from car paint is a race against time. As soon as the black lumps have dried out, they can only be removed from the car with a special cleaner.

In fact, the black spots are not tar at all, but a mixture of small grained pebbles and bitumen. Tar or pitch extracted from hard coal has not been used in road construction for several decades. The reason for this is its strong carcinogenic effect on the human organism. Since then, only bitumen extracted from crude oil and partly naturally occurring (also called “earth pitch”) has been used. According to the latest findings, it is considered not carcinogenic and as far as possible harmless to health. Even though, strictly speaking, the black spots no longer consist of tar, the term tar spot has established itself in general usage.

After a long motorway trip on a hot summer day, the car often looks like a crumble cake. To remove the tar stains, drivers should not waste time and clean the black spots with a dry cloth. In some cases even simple butter or margarine can help. The tar stain is rubbed with the fat. After a few minutes, fresh tar stains can simply be wiped off. But often it is already too late for that. When the car has stood up for one night, the stains have dried up and removing them by hand is like doing Sisyphean work. But panic is also inappropriate now, because the paint can be saved with a special tar cleaner or tar remover.

A gentle and chemical-free solution is special kneading like the cleaning kneading from Petzoldt’s. It can be used to remove black stains from car paints, rims and glass panes. For this purpose, the affected surface is simply moistened well and then rubbed over the dirt with the cleaning clay. The dirt gets stuck in the dough and is simply kneaded into it. The Petzolds cleaning clay works with a special lubricant and removes tar stains, insect remains, rust film and stains from tree resins.

For professionals we recommend a set with different kneaders such as the AmbiClean lacquer cleaner set. It consists of kneading in various degrees of hardness as well as a large bottle with special lubricant for vehicle cleaning. It removes tar stains, rust, remains of insects, industrial dust and other stubborn dirt. If the dough does not lead to the desired success, a chemical-based tar remover is often the last resort.

A proven product is the Sonax tar remover in the 300 millilitre spray bottle or as a 5-litre storage canister. The product is used by bus companies and freight forwarders and is also suitable for domestic use. During application, the Sonax Tar Remover is sprayed onto the affected area and waited for a few minutes. Afterwards it should be easy to wipe off dirt with a dry cloth. According to the manufacturer, the product can remove not only classic tar and oil stains but also residues of stickers.

The tar remover from Liqui Moly has a similar effect in the 400 millilitre spray can. The chemical product dissolves tar stains, resins as well as grease and fresh paint stains from vehicles. The product of Liqui Moly (as well as that of Sonax) must not be used on polycarbonate plastics and acrylic glass. In general, care should be taken with chemical products. Before large-area use, car owners should first try out the sprays in a less visible place. If the result is satisfactory, it can also be used on the bonnet or on the mudguards. The tar cleaners should not be used on matt surfaces. Due to the glossy effect, they otherwise begin to shine, which is difficult to undo. 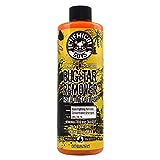 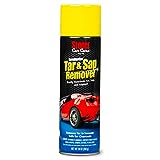 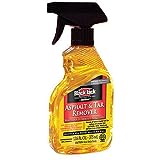