A bicycle tour without music is unimaginable for many bikers. After all, your favourite songs offer the perfect musical background for every driving situation: driving beats when a climb has to be mastered or quiet sounds when you drive into the sunset on a lonely road. However, listening to music on your bike often has the disadvantage that your MP3 player or smartphone is in your pocket or backpack. During the journey, it is difficult or even impossible to operate the vehicle and there is always a safety risk involved. An alternative is the bicycle MP3 player. 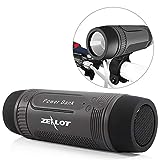 The bicycle MP3 player is a standalone device that you can attach to the frame or handlebar of your bicycle. The range of functions of the devices on the market differs greatly. While some models act as pure speakers, which you connect to a player via Bluetooth or cable, others offer a playback function for MP3 files from a Micro SD card. An example product is the Crypto Music Rider aluminum MP3 player. The splash-proof player weighs only 100 grams and is equipped with a loudspeaker and easily accessible controls. It has a holder with which it is attached to the handlebar. Power is supplied by a rechargeable battery, which can be recharged using the supplied USB cable. The Crypto can play MP3 files via Micro SD card, which can be up to 8 GB in size. If you want to listen to more than just MP3 files from a Micro SD card or USB stick, a device like the Security Plus Bicycle Radio may be right for you. In addition to an MP3 function, the device to be mounted on the handlebar has an integrated tuner with which you can listen to your favorite radio stations. This keeps you informed about the current traffic situation and the weather on longer bike tours

As an alternative to the pure bicycle MP3 player, there are Bluetooth speakers such as the Avantree Cyclone, which offer a wider range of functions, but are also heavier and more expensive. The loudspeaker, which weighs about 430 grams and has the shape of a drinking bottle, can be attached to the frame or handlebar of the bike with a bracket. Via Bluetooth or NFC, the device connects to an external player such as a smartphone. Here you also have the option to play music files from a Micro SD card. Regardless of the source, the Avantree Cyclone can play MP3 and WAV files. The controls for jumping back and forth between songs, starting, stopping and pausing music, and volume control are easily accessible and, like the rest of the speaker, protected against splashing water. Due to the battery operation, the loudspeaker can also be used away from the bicycle. Versatile applications for the mobile loudspeaker with MP3 player can be found, for example, when camping, on the beach or on hiking tours

When cycling, a Bluetooth speaker or bicycle MP3 player is safer than an MP3 player or smartphone in combination with headphones. Although the latter is not generally prohibited, functions such as noise suppression prevent traffic noise from being perceived. This rapidly increases the risk of accidents when driving in city traffic. Without headphones, the music is also in the foreground, but it doesn’t completely suppress the ambient noise. Martin horns and horns as well as braking or approaching vehicles are still clearly perceptible. However, you should also keep the volume and bass in check here. Not only because of safety, but also because of consideration for other road users. 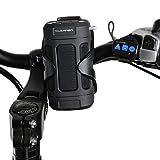 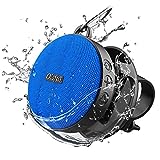 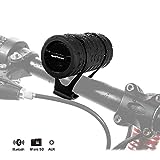 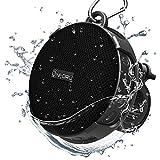