A door intercom is a communication and access control device that allows visitors to an apartment or house to be identified and, if necessary, rejected – or greeted with joy – before they enter. The systems are also referred to as intercom systems, hands-free door systems or Intercom (inter communicare). They transmit speech, images or videos using electrical signals and always consist of two units, an outdoor unit and one or more indoor units. The outdoor unit is usually installed next to the front door in multi-family houses, but can also be located in or at the entrance gate in single-family houses with a front garden. The indoor unit is usually installed near the apartment door in rented flats. Single-family houses can have several indoor units, which can then be positioned as required. Indoor devices do not necessarily have to be an integral part of the door intercom system, but can also be a smartphone, for example. 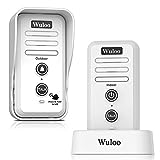 In both the outdoor and indoor units, there is always a microphone and a loudspeaker in all systems. In the case of outdoor units, these are usually discrete unit components built into the housing, so that hands-free operation is possible. This may also be the case with indoor units, but they are often installed in a housing similar to a telephone receiver with a cable connection. With simple systems, only sound is transmitted in intercom technology, i.e. both communication participants can speak simultaneously. In more comfortable systems, a camera is additionally integrated in the outdoor unit and transmits a video recording or individual images of the inlet-customer. As a rule, bells are also integrated in the end devices belonging to the door intercom system, i.e. a block with buttons is located in the outdoor unit of apartment buildings and the bell is located in the indoor units. In single-family houses there is only one push-button outside. In addition, the indoor unit is often equipped with a button to open the front door, so that the entire control of the front door is carried out with one device and the bell of the apartment door is also integrated in rental apartments. Multi-core copper or fibre-optic cables, radio or WLAN are common transmission media for door intercoms.

A higher degree of security is a decisive but not the only advantage of a door intercom system. It can also be used for convenience, as some variants are equipped with a mobile indoor unit that contains the bell and can be used to open the door from any position – practical for people who do not want to leave their seat when opening the door. Systems with image or video transmission, some of which are also designed for night operation, offer a high degree of security. They are suitable for the gate of a private home, where possibly not sufficient lighting is installed. But also as an additional system to an existing intercom system in an apartment building, the apartment door can be effectively monitored when the stairwell lighting is switched off, because the usual spy in the apartment door is useless in this case.

Simple door intercomsSimple systems only offer the functions ringing, intercom and door opening. They are usually wired, the outstation is designed for hands-free operation and the indoor unit communicates via a telephone receiver. Such systems are offered with an indoor station and a bell push button on the outdoor unit or for rental houses with several apartments as a set with a defined number of indoor units and the same number of bell push buttons on the outdoor unit.

Door intercoms with picture or videoYou can benefit in many situations from being able to see your interlocutor through the door intercom before opening the door. For video door intercoms and systems with pictures, the outdoor unit contains a camera and the indoor unit a display. Many video door intercoms also include night vision mode. LEDs irradiate the environment in front of the outdoor unit and enable relatively clear identification of persons up to a distance of approx. 2 metres. Another important criterion is the reception area. If it is too small, a person standing slightly to the side in front of the camera will no longer be detected. With some video systems the outer part may have to be supplied with additional power. Simple models can usually be connected via the 2-wire connection pre-installed in apartment buildings. However, more modern variants often require an additional connection to the house power supply or require an IP connection.

Door intercommunication systems with radio connectionThe technology of a radio video door intercommunication system is clearly more complex than that of a common video door intercommunication system. Therefore, the model variety is much more manageable than with the other transmission technologies due to the fact that the number of systems offered is not so high. The main problem is that it is very difficult to transmit audio and video signals via a common radio signal. Some manufacturers have ingeniously solved the problem from their point of view. They offer wireless video door intercom systems that do not transmit videos, but instead send several individual pictures to the indoor unit. The DECT standard is also only suitable to a limited extent because it is designed for in-house telephones and not for video transmission. However, such systems can in principle be used like a radio door intercom system, but the range is limited. However, they also offer some advantages such as recording to an answering machine or forwarding to a smartphone. The reasons mentioned above led to the fact that the technology of current radio video door intercoms is mostly based on manufacturer-specific standards for loss-free transmission. Thus devices of different manufacturers are incompatible among themselves and one binds oneself in the course of this to a manufacturer. Against this background, it may be advisable to consider whether a simple radio bell in 2-wire technology would not also be a good solution. Such a door intercom system is much cheaper, easy to install and less susceptible to faults.

IP door intercom and WLANIn IP (Internet Protocol) based systems, the call participants are connected via the Internet or the internal house network. The intercom can be connected to the Internet or the home network via a network cable or WLAN connection. An operational network is a prerequisite and when the intercom system is integrated, it automatically receives an IP address from the WLAN router via the DHCP protocol in the usual manner. This enables seamless integration into any existing network. Even a control with the Smartphone is then feasible with some IP door intercoms equipped with corresponding functionality. Power is usually supplied via the network cable, so no additional power connection is usually required. However, this does not apply to WLAN-based systems. You need an additional power connection, which can usually be realized with a simple adapter without having to connect a network cable. The same applies to IP video door intercoms.

The connection of IP devices is configured by the router. This applies to both wired IP technology and WLAN technology. All other wired devices can be connected via 4-, 3- or 2-wire connections, depending on the type. The latest technology is 2-wire based. However, older systems can usually be adapted to this. With 2-wire technology, video signals, audio signals and power are transmitted via only 2 wires. The connection is referred to as a bus to which all devices are connected. For interference-free transmission, the cable cross-section should not be smaller than 0.75 mm². If older components are to be further used, their simple upgrade to modern technology is usually possible. Older systems with a 4-wire bus can be converted to modern transmission technology using two additional short cable connections. Corresponding retrofitting material and instructions are available online or in stationary specialist shops. The conversion effort is low and offers a worthwhile alternative to the purchase of new equipment. 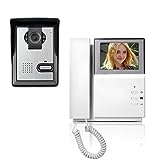 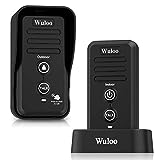 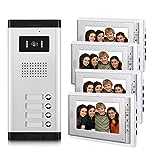