You can see them almost everywhere. Camera tripods in a wide variety of designs and shapes. They are equipped with film cameras or photo cameras, they are large or small, have one leg or three legs. But what do you need these tripods for and which one is suitable for which purpose? I’m sure everyone has asked themselves these questions before.

The camera tripod is used in many situations. Especially when making movies you see it again and again. There it helps to find the right position, to hold it and to make life easier for the cameraman. Film cameras are very heavy and unwieldy, so they are mounted on tripods. The same applies to television studios, where the tripods are mobile. At the same time, they help to keep the image sharp. In the field of sports and music there are also cameras which are mounted on rail tripods and remote controlled. But the photographer also needs the tripod for shots where he cannot or may not use a flash, for example.

The tripods are available in different versions for different applications. In sports photography there is usually a one-legged tripod, which the photographer needs because he works with long focal lengths. This tripod helps to prevent the image from blurring. Then there are the so-called tripods. These are mostly used by professional and amateur photographers. These are very stable but also need more space. These tripods are used, for example, for shots where the exposure time is extremely high, or also for night shots. One can also try to represent the rotation of the earth by long-term exposure with three-legged tripods. The amateur or hobby photographer uses this kind of tripod also for photographs, as with weddings or if he would like to have wobble-free pictures. He’s playing it safe with that. Small action tripods have populated the market recently. These are very small, handy and have flexible legs. These are particularly suitable for mounting the camera in unusual locations to take unusual pictures.

For professional filming or in the field of sports completely different tripods are used. Mostly there are, like in the studio, mobile tripods on which the camera is installed. Then there are so-called body tripods, which are attached to the body of the cameraman and ensure great flexibility. For some time now, there have been tripods in the sports area that run on rails and show very nice pictures with the installed cameras. However, these are all professional tripods, which also have a corresponding price.

When you buy a tripod, you should first realize what you need it for. Most tripods are three-legged and can be extended to a certain height with wing screws or a folding mechanism. You should also make sure that the camera is attached to the tripod with a standard screw. Also the middle of the tripod should be able to be driven up or down again. The rotary motion of the tripod head is also very important for this, so that handling is quick and easy.

A tripod is a practical addition for photographers and filmmakers. However, you should pay close attention to whether you really need this. Also the requirements to the tripod are to be examined exactly, since one can sell oneself also fast in the tripod, and it remains then unused in the cabinet. If you want to take night shots or shots with a long focal length, a tripod is a must. But it is also important whether it is a tripod or a monopod. 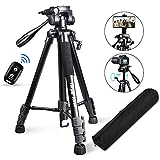 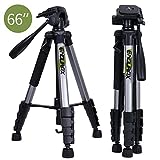 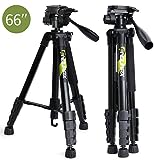