Modern screens meanwhile have an outstanding image quality, the Ultra-HD resolution is already the standard on the computer. When selecting a new monitor, you should therefore focus on other criteria, such as size depending on location and use. For the office, 24 inch monitors can almost always be recommended, which are inclinable as well as rotatable and height-adjustable.

There are the more expensive IPS panels with accurate graphics from every angle and the cheaper TN panels that gamers prefer because of their speed of response. Nowadays, many users appreciate the wide range of devices such as notebooks, PCs, smartphones, TVs and tablets, but they need a separate monitor for certain applications. The TV screen would be too far away to process text, the notebook is too confusing when applications run in parallel, tablet and smartphone offer only limited screen sizes. With the right monitor, for example, a powerful laptop can be integrated into the Smart Home.

The flat screen is the standard construction type of modern monitors, it is made possible by modern technologies. There are LCD monitors on the basis of liquid crystals, a special processing method of this technology is the TFT technology (Thin Film Transistor). The liquid crystals of the LCD monitor represent the pixels (individual pixels) that produce the image via color filters. With the TN-Panel (Twisted Nematic Panel) the crystals change their orientation by an applied voltage, which changes the refraction of the light. The technology is regarded as inexpensive and quick to react, consumes little energy, but is also less stable at the viewing angle. From the side, color and contrast deteriorate significantly. With the IPS panel, the pixels rotate, which creates a very high contrast, the display is very responsive, colours are incredibly realistic and legibility from very large viewing angles of up to 178° is maintained. But this technology is a bit more expensive and consumes a bit more energy. Irrespective of the panel technology, the backlight influences the image. In many cases LEDs are used, which enable a very flat design with little energy. For example, there are LCD monitors with LED backlighting, sometimes referred to as LED displays, but this is basically misleading. Fluorescent tubes are used less frequently (CCFL backlight). LEDs in turn can be used as edge LEDs or direct LEDs.

Anyone who buys a monitor in 2016 can opt for the classic flat screen or curved screen. This one’s a little more expensive. It follows the shape of the curve of an eye, which increases the visual experience. The field of view expands to the sides, the whole picture appears more spatial. This is certainly advantageous for videos, but may be superfluous for pure office work on the PC. Graphic artists, gamers and photographers, on the other hand, appreciate curved screens very much. They are offered in a 21:9 format and partly receive very good test marks from the Stiftung Warentest, such as the LG UltraWide 34UC97-S and the Samsung S34E790C LED (both “good”). Whether a monitor display is chosen glossy or matt depends on the installation location: Unfortunately, at the window seat with its coveted, natural light there can be strong glare, which is why matt displays are recommended. The glossy monitor surfaces, however, reproduce colors more vividly and realistically. The contrasts also work better. Full HD (1,920 x 1,080 pixels) is the standard for picture quality, Ultra HD (4k, because over eight million pixels) is also very often found. That would be four times Full HD with correspondingly high picture quality. Although the color saturation cannot be high enough, the color perception depends on the ambient light and is also individually different. The brightness should be adjusted to the ambient light and can therefore be adjusted. Image modes are a good feature for monitors, many manufacturers offer ready-made configurations. Users should try out these presets. Adaptive Contrast Management (ACM) ensures energy efficiency while optimizing image reproduction. It automatically adjusts contrast in very dark or bright scenes and is therefore also a useful feature. Last but not least, a screen should have many connections. 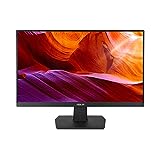